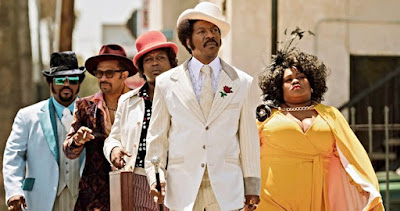 A confession at the start.... I have never seen a Dolemite movie before; at least not all of one.  I am on the tale end of the age bracket for those movies.  I know my uncle who is like 10 years older than me saw those movies and talked about them; I never saw one on television or on video.  And its not because I was raised prude or anything like that. I am sure my grandmother had those albums and probably went to see those movies in the theater.  She, and my mom, were not about me seeing that stuff when I was young. Once I got older, I shifted more towards Black Cesar and Shaft movies so Dolemite was only something I heard people talk about and rappers reference.

The Netflix movie, Dolemite is My Name, starring Eddie Murphy is a good jumping on point for young people with no knowledge of Dolemite and has enough Easter eggs for long time fans of his albums and movies.

Murphy plays, Ruddy Ray Moore, a struggling comedian living in Los Angeles in the late 60's looking for his big break into entertainment.  Failing as a musician and as a stand up comedian, Ruddy Ray takes a chance by borrowing and expanding the jokes and rhymes from a homeless person who frequented the music store he worked in and adopted the over the top moniker of Dolemite.

As Dolemite, Moore's comedy reaches new levels as he gains success with comedy albums and tours across the country.  Looking to expand the Dolemite brand, he hatches an idea to make a Dolemite movie.  Emlisting a writer, played by Keegan Michael Key, and hiring film students from UCLA, the second half of the movie delves into how the movie gets made and the absurdity of the production.  Wesley Snipes plays actor Du'rville Martin who serves as the director of the movie and is incredulous as to how ridiculous the Dolemite movie and concept is.  Snipes is wonderful in his role and in part steals every scene he is in; including the scenes with Murphy.

And Eddie Murphy is brilliant in this movie.  Its been a while since we have seen this Eddie Murphy and not just the vulgar language( and there is a lot).  We have not seen Eddie Murphy has this kind of energy and passion in a movie probably since Dreamgirls.  In Dreamgirls he played against type and it earned hin an Oscar nomination.  In Dolemite, he is closer to playing Eddie Murphy, but with swagger and emotional center that makes you cheer and care for Rudy Ray Moore.  Its probably Murphy's most complete role ever where you can see not only his incredible comedy talent, but his underrated ability to convey drama where needed.

A great original movie from Netflix and director Craig Brewer; who is directing Eddie Murphy in the Coming to America sequel.  If this is the kick off for an Eddie Murphy renaissance, its a great start and I look forward to the next chapter.

Posted by Brothascomics at 5:49 PM