Living with Yourself Review 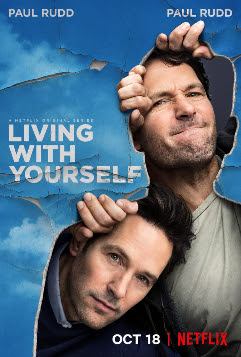 Woke up to thunderstorms in sunny, South Florida Saturday morning as the remnants of Tropical Storm Nestor was making its way across the peninsula.  Not that I had plans outside the house, but the rain and strong winds forced me to stay inside and catch up on some tv shows I had been meaning to watch.  I mean I coulda did stuff off my Honey Do List, but... well you know.

I had heard about this Netflix show starring Paul Rudd called, Living with Yourself and it popped right up in the "You might like" section of Netflix and for once, Netflix was 100% correct.  Living with Yourself is an eight episode mini series; with each episode being about 30 minutes long.  Rudd stars as Miles, a 40- something, married ad executive who is just feed up with the minutia of life.  He and his wife, played by Ainsling Bea moved to the suburbs from New York City 10 years ago with the hopes of starting a family.  But life is messy and gets in the way and the next thing you know, you hate your job, hate your life, and your relationship is trash and those ten years and your hopes and dreams pass by in an instant.

To get out of that rut, Miles is suggested by a co-worker to visit a spa to get rejuvenated.... its not some spa for him to get a handjob.  The spa is super exclusive and the entry fee is fifty thousand dollars; money which Miles and his wife had been saving to start IVF treatments.  Paul takes out the money and heads to the spa but he does not get a hand job or rejuvenated- he gets cloned and in a bit of medical shenanigans, old Miles get buried in a field while new Miles looks to take over his life.

Living with Yourself would not be nearly as entertaining without Rudd.  Playing against himself as old Miles and new Miles, he is witty and charming as new Miles, and desperate and pathetic as old Miles.  And it would be easy to just follow the surface jokes the show provides and skip over the deeper meaning of life and connectedness that people need in relationships.  Old Miles, even though he loves his wife, allowed work and life to make her feel less important and that crushed their chances to connect; especially after a tragedy they experience early in their marriage.  By seeing New Miles free of all the stress, hang ups, and his internalized bullshit, Old Miles is able to reflect on what is important to him.  This story is told in flashback and flash forward moments that always keeps the viewers present and unfolds the story in a non-complicated matter.  Plus, its the correct length of episodes; unlike many Netflix shows that are often 2-4 episodes too long.

Overall, a very entertaining show and highly recommended; especially for couples who may not feel connected to one another at this stage in their life.  Should spark some interesting conversations about who you were and who you are and who you want to be.And if you read a review that said the show is a dark comedy... its not that dark at all.  Very well done, Netflix!
Posted by Brothascomics at 6:30 PM