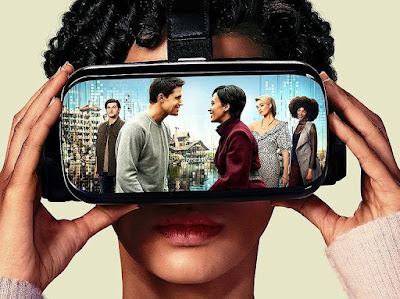 As the pandemic and self quarantines continue, we are all searching for new shows to watch. Its very easy for me to continue to re-watch Chuck and Orphan Black, but while loading up Amazon Prime, they often hit you with a new show promotion that may spark your interest.  Amazon had been pumping up Upload for a minute now and  they previews seemed very interesting so when it finally became available, I wound up binge watching the show in two days.  Before the review, I will let you know the show is 10 episodes and each episode is under 30 minutes.  Lets begin


Upload tells the story of the afterlife in 2055.  Things have changed... alot.  While the idea of heaven and hell and religion are not dead; the future of the afterlife has moved on line.  When a person dies, and if they paid for it, their consciousness will be uploaded into their own heaven( which they paid for).  And, heaven aint cheap and it even has layers based on how much you can pay.  This is a Matrix level event in terms of the premise of the show, but its  layed with humor and uncomfortable truths about our own mortality, our thoughts about life after death, and are ever increasing dependency on electronics for attention and gratification.

The story follows two main characters.  The first is Nathan, played by Robbie Ammel.  Nathan is a computer coder, and along with his coding partner, is on the brink of making big money with a program they have created.  However, he is in a toxic relationship with his girlfriend and on a random night, he is injured in a car accident and is uploaded into the heaven that his girlfriend picked and paid for him.  Nathan's death is sudden and it takes a while for him to adjust being deceased.  However, he has an "angel" named Nora, played by Andy Allo who works at the off line site for when people die and these angels assist the newly deceased adjust to their new on line heaven.  Nora is single and spends much of her time off work taking care of her sick father and trying to convince him to upload against his wishes( he wants to be with his deceased wife in regular heaven)

Nathan and Nora get to interact alot as you can imagine and their burgeoning love story is told with wit and angst as each try to balance the feelings they have for one another along with the balancing their other relationships.  Nora is especially torn emotionally for having feelings for one of her clients, but also trying to balance her life off line and her personal relationships.  While Ammel is the bigger star name, Andy Allo is the true star of this series giving it the emotional weight to ground the show in reality.

This is the best review I can give without dropping major spoilers.  While their love story is a major A plot, the subplots of the show are excellent and there is a mystery unfolding that is being played behind the scenes on earth and in heaven.

Overall a very well written and well acted series.  This series is full of language and partial nudity so be very wary of watching around your youngsters.   Highly recommended!!

Posted by Brothascomics at 10:44 AM