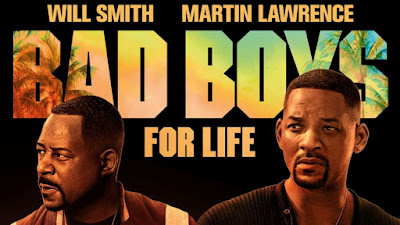 For those of you that know me, you would know that Bad Boys (1995) is one of my favorite movies of all time.  It truly is a perfect buddy cop/action comedy with two great leads and its a wonderful mix of comedy and action.  On top of that, it is so rare to see a buddy copy movie with 2 Black leads and both Will Smith and Martin Lawrence shine brightly in this movie.

Now if you also know me, you know that I hate( might not be strong enough of a word) Bad Boys 2.  Whereas the first movie played to the strengths of each of the lead actors, Bad Boys 2 is an overbloated Michael Bay crapfest with a thin plot and an even thinner since of purpose and direction.  The 8 years between the movies might as well had been 80 years as nothing survived from the original that made it special.

So when I heard there was going to be a Bad Boys 3, I was 100% against it.  There are reasons: One this seemed like a Will Smith vehicle to try to get back to his movie star status which had been diminished greatly over the past 10 years.  Also, have you seen Martin Lawrence recently?  I love the dude but he looks like the dude that ate Martin Lawrence.  It just seemed like a desperate money grab for dudes looking for a payday so I dismissed this movie from the jump.

Well the quarantine and pandemic will have you watching anything and everything for new content and Bad Boys 3 was up to stream so I gave it a watch and I was terribly wrong about the movie.  Thankfully they left Michael Bay somewhere in Miami and out of this movie as the director and this new direction gave Bad Boys 3 and more grounded feel; much like the original.

The plot, Marcus Burnett and Mike Lowery been partners for over 20 years cleaning up the streets of Miami.  And much like their real life counterparts, they are old; well at least Marcus, played by Martin Lawrence, is old.  Its time for him to retire, especially now that his daughter just had his first grandchild.  Lowry, played by Will Smith, is that Peter Pan dude who, no matter what, refuses to get old.  He still wants to drive fast cars, date all the pretty women, and feels that he is bulletproof.

Well, Mike is definitely not bullet proof as a tragedy bring back old enemies who are targeting Miami Police officers who were involved in case that was solved over 20 years ago.  After Mike recovers from his shooting, he wants to get revenge and seeks out his partner who refuses to help. Marcus is on a new path now enjoying his life as a retired cop.

The movie hits levels of emotional depth missing from the previous two entries and you can see the active parallel; especially with Will Smith in the sense of: If I don't have this, what do I have? And with Martin, who in real life, is perfectly content with where his life is and doesn't feel the need to upset that by getting involved in any more craziness.

Of course they get back together and of course they look to track down and take out the people behind the assassinations.  Along the way, the new task force(AMMO) is helping track down the killer.  There are cameos from previous movies, cameos from some of Miami's most famous residents, and all the shootings and explosions you come to love from Bad Boys.   Its just not so over the top as Bad Boys 2( this is a good thing)

There are jokes all around about being old and getting old and how to transition from being the young hot shot to now being the old man on the block.  The movie hits on an action, comedic, and emotional level.  There is a plot twist that I hate so much that it almost ruined the movie for me, but I will allow you to make that decision on your own.

Overall, lots of fun playing in a very familiar sandbox with old friends.  A great piece of nostalgia that left just enough crumbs for another sequel.

Posted by Brothascomics at 2:34 PM