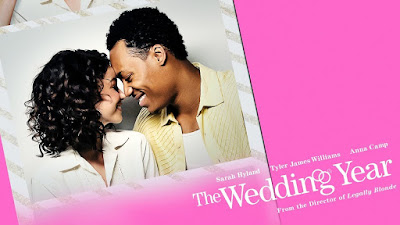 During this Coronavirus lock down we have all been watching more tv than usual.  Whether you watching cable tv, Hulu, Netflix, or Disney Plus, the search for content is continuous as the lockdown has stretched from days, weeks, and now a month plus.

So as I was loading up my Amazon Prime a few weeks ago, the preview for this movie, The Wedding Year popped up and it caught my interest.  For one, it was a romantic comedy; a genre that is pretty much dead in movie theatres now and only exists on streaming services.  Second, there was an interracial couple; something you never see in a romantic comedy. Lastly, I immediately recognized the stars as Tyler James Williams, from Everybody Hates Chris and Sara Hyland, from the recently ended Modern Family, were the stars.

The trailer seemed kinda cute and dumb in the classic romantic comedy way so I set aside some time to watch this.  Confession: I love romantic comedies. I do!  Its probably a by product of loving my wife and her love of these movies, but I lean into them pretty strong with her as a moment for us to bond and laugh.  Throw in that we watched both Everybody Hates Chris and Modern Family and this was a bonus to watch two kids we saw grow up on television stretch their acting wings and move into more adult roles.

The plot of The Wedding Year is that of a typical Romantic Comedy:  Two people from different backgrounds meet up and fall in love.  Mara, played by Hyland, is a aspiring photographer in LA who is biding her time working in a fashion boutique.  Her life consists of getting high and looking for men on Hook Up apps to take her out to expensive dinners.  Jake, played by Williams, is a southern kid who moved to LA to open up his own restaurant but for now is working at a local diner.  They meet on this Hook up App and try to have dinner but its way too much money for Jake and they wind up leaving having pancakes at Jake's diner.  The hook up leads to dating, dating leads to moving in together, and into a relationship that neither expected.

And being in a relationship brings couples expectations and a part of that is attending weddings together and in the course of one year, they have to attend seven weddings of various friends and family.  Each wedding brings out a different side of their growing relationship but also begins to pull apart their closeness as Mara actively seeks out to sabotage her potential relationships before they become too serious.

This all comes to a head at Jake's brothers wedding as his family presses Mara about when her and Jake are going to get married, have babies, and move back to Virginia.  This is not the life Mara has planned for herself and when she and Jake talk about it, it leads to them breaking up.

Of course this is a romantic comedy and they wind up back together, but I am not going to spoil how that happens.  The Wedding Year is fun and cute and will definitely appeal more to the 20-30 something audience.  The jokes are typical and it the movie stays in its lane as a light comedy to help you get a laugh.  Overall, a fun movie for lovers of classic romantic comedies.

Posted by Brothascomics at 1:51 PM