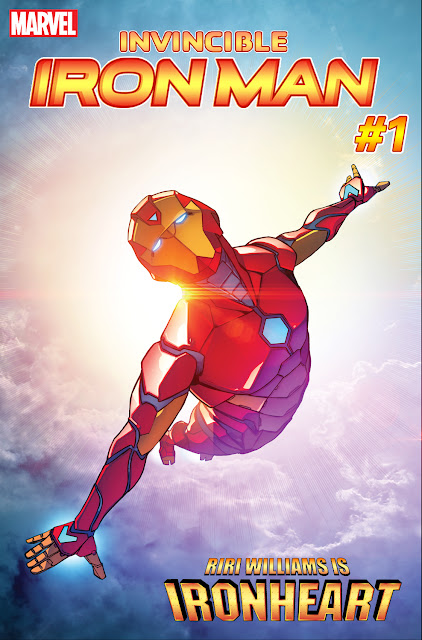 I am a little late to this party but I wanted to get a review in before issue 2 comes out.  As Marvel moves into their Marvel NOW era, we get a relaunch of Iron Man.  But its really not Iron Man- its Iron Heart as RiRi Williams takes over the Iron Man armor... well sort of.  If you are a reader of this blog and follow us on Twitter @brothascomics, you will know that we have called out Marvel for essentially making a Plessy V Ferguson roster of heroes.  We have the Black Iron Man, Black Captain America, Black Spider-Man, etc.  Again, this would not be an issue if their white counterparts were not around.  But they are, which in my opinion, diminishes from the Black heroes.

That being said, even tho Tony Stark is not around, Iron Heart is not the only Iron Man.  DR. Doom is also Iron Man in a separate Marvel Now title so we really have the same separate but equal heroes living and existing in the same space.

When news dropped that RiRi Williams was going to be Iron Man, I was excited, but also a bit scared.  Marvel wants to diversify their books, but not their writing rooms and when I heard Bendis was going to be writing this book, along with the Miles Morales Spider-Man, I kinda just rolled my eyes.  Marvel missed the chance to hire a Black, female writer to give the book a voice that is so underrepresented in mainstream comics.  And to me, this plays out in IronHeart.  This is not including the contrversey over the cover by J. Scott Campbell and the white boy fan backlash of having Iron Man now be a Black teenager.

The book opens with RiRi Willliams being diagnosed as a child hood prodigy and her parents hearing this and dealing with how they will need to parent her.  Its a great opening scene and got the book off to a fascinating start. But the book time jumps between the past and the present over the course of the issue and we see IronHeart fighting a D-level villain and we see her as a 10 year old where she meets her best friend Natalie.  Then back to fighting awful villain and then here is where I kind wanted to jump off. 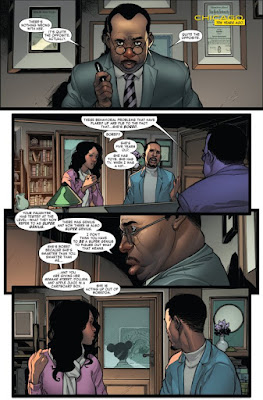 The book is set in Chicago and you would have to live under a rock to not know the situation there in the city is bleak.  Joblessness leads to crime which often leads to violence.  Bendis decides to tackles this in the history and world building of RiRi and its unnecessary.  An act of violence( a drive by shooting) kills RiRi best friend and her dad(step dad).  Yes, tragedy as a call to action for heroes is a long time comic book trope- I get it!  But it also does not have to be. Why use a real life city and its tragedy to build the hero?  Why use the loss of innocent Black lives as the spark to becoming a superhero?  In light of the James Rhodes tragedy from Civil War 2, I think we all came to the conclusion that killing Black folks for white tears is wrong.  And this is wrong here. Iron-Man/Ironheart is not a street level hero like Spider-Man or Luke Cage who deal with regular people in their attempts to do hero work. Iron Man/IronHeart is an Avenger of the highest order.  She will fight powerful villains and along side powerful heroes.  Iron-Man/Ironheart is not going to be on the streets of the southside of Chicago looking for hooligans who killed her family.  It makes no sense.  I didn't like that part and it spoiled the rest of the book for me. 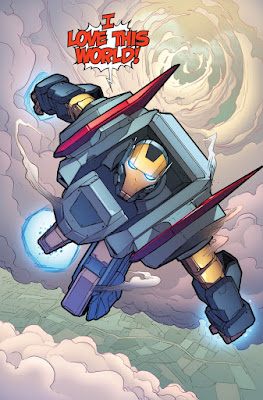 The ending of the book is a time jump to present day.  RiRi's mom knows about her superhero work and is ok- well as ok as a mom could be with it.  RiRi's armor is still in its developmental stage and she needs new AI to work better.  Out of the blue of course there is a delivery and of course Tony Stark makes an appearance...as AI.

Overall the book is ok.  The art work is great and the story is recoverable, but to me its not a great start for such a groundbreaking hero and book.  Hopefully there is a payoff to her family being killed, but I am not holding my breath that it will make more sense later.