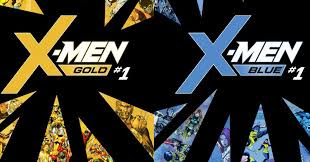 News about the X-men in comics the last few years has not really been that great.  We all know the edict put forth by the Marvel powers that be about not creating new mutants and how the X-men have been pushed to the back of the line to make way for the InHumans.  There had even been rumors that the X-Titles themselves would be phased out after the X-Men VS InHumans miniseries because of Marvel not wanting to bump for characters that their cinematic universe does not own. There is precedent for this because the Fantastic Four are still on a milk carton.

Marvel shot down those rumors when they came out and announced the X-books and certain characters would be getting their own solo titles.  There was to be a Jean Grey solo title, along with Ice-Man and Cable also getting books.  Not exactly a ringing endorsement for me loosening my change purse to buy these books but it was a sign that Marvel was not going to kill the X-Men titles.  Then Marvel did something they knew would get X-Fans hyped by announcing that the two new X-titles being launched would be X-Men Blue and X-Men Gold.  Now if you are a long time reader of the X-Men, you know the craziness surrounding the early 90's relaunch of the X-Men.  At the time, Marvel split the X-Men into two books and two teams- Blue and Gold.  Each book also had top creators for their relaunch.  Jim Lee and Chris Claremont on one book and Whilce Potacio and John Byrne on the other.  When modern comic fans tell you they "Love the X-men, its probably because of these books!
These books were fire and sold out like crazy with people having to get 4th and 5th prints of the books.  It was a great time for comics and comic book fans!

So when Marvel put out in the universe they were going to do X-Men Blue and X-men Gold again, people( including this blogger) got hyped.  I was thinking they were finally going to bring some semblance back to the books and cast off these mutants that no one cares about( looking at you Gold Balls) and focus on the characters that so many of us grew up with and care about.  Not only that, I convinced myself that the books would get top creative teams. I did not think Jim Lee was coming back or anything, but a hot new artist and a great writer and we could relive the good ol' days.  Man Marvel slapped me in the face. 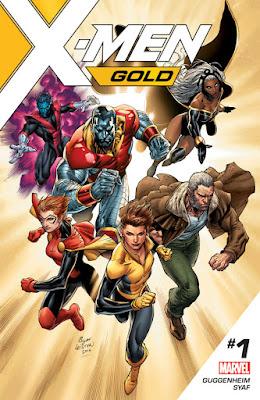 First off the Gold Team looked to have potential as it had classic characters from the X-Men with Storm, Colossus, and Nightcrawler. I could never see Old Man Logan again and it would be too soon but whatever.  Then, they added Rachel Grey a character that NO ONE cares about or has ever cared about.  And then they top this shit burger by telling us Kitty Pryde is leading the team. Say what now?  The team that has both Nightcrawler and Storm is being led by Kitty Pryde? Man, get the fuck out of here with that mess! And then they top the shit burger with a creative team that no one has heard of.  Look these guys may do fine and great but there is no sizzle with the team or the creators so why would I spend my money on this?  On top of that, Kitty comes to lead the X-Men because Storm gives up her leadership.... What now? She gives up her leadership to Kitty?  Kitty Pryde? Man get the fuck out of here!  Kitty Pryde has never made anything better with the X-Men. And I mean never. She is quite possibly the worst X-Man ever and even tho they have given the character a much better middle than the beginning, she is still awful. 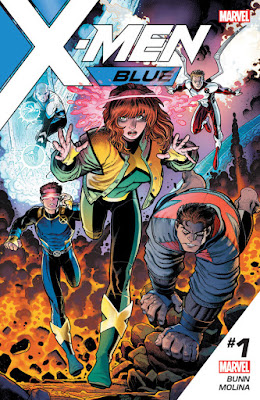 Then the Blue team.... man listen... They already did this.  The classic 60's era X-men team just recently had stories running through All New X-Men and it was fine.. I guess.  But who was asking for this?  They could've done the book with the current version of the originals minus Cyclops or add the young Cyclops.. I don't know?!  Who was asking for a book with Beast, Ice-Man, and Angel tho? They suck! They have always sucked!  Its just such a disappointment and the creative team is also uninspiring.

This messed me up yesterday when this dropped! I thought Marvel was fully behind the X-Men again and were going to do their best to reset and restore the team as one of their flagship titles.  They did not.  This looks to be another curve ball by Marvel at Fox to not fully back X-Men until those movie rights are shared or turned over outright.

So I wont be buying either of these X-Titles and none of the relaunched books because.. why the hell would I?  We love supplying you guys with reviews of new and current books but I cannot get behind this at all.  Sorry, Marvel- you lost an X-Fan with this one!