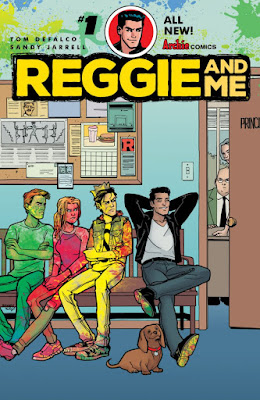 As a long time Archie reader and follower, my relationship with Riverdale's resident brat and prankster has always been complicated.  As a youth, I could not stand Reggie because he constantly was dragging Archie down with his schemes and even tho he always got his comeuppance at the end, I hated the character for what he represented!

As I became a teenager, I began to appreciate the character more because, like Reggie, I had developed a dark side.  I recognized and saw through the bullshit that was/is high school, cliques, and social status and did whatever I could ( legally) to reject and bring down any and all things and people who were more popular than me.  Call it being a rebel, call it embracing your dark side, call it whatever you want, but high school me was way more Reggie than Archie.

With the launch of the New Archie books this past year, our first Reggie appearance was of course in the middle of a scheme to break up Archie and Veronica.  But they also began to flesh out his character in a way that years of comics and digest never had.  Reggie's mom is a mom who is on PTA and every other committee to help children- except her own.  You see the complicated relationship he has with his father and his constant search for approval from a man who refuses to give it to him.  Reggie's Daddy Issues are not uncommon in a society where men often refuse to acknowledge or reciprocate their sons feelings for fear that it will make them soft, weak, or gay.  Its total bullshit, but it exists and Reggie has created a world for himself where to make himself feel better, he needs to put others down! I think we all know THAT kid from middle school and high school and Reggie fits the bill perfectly.

Reggie and Me #1- like the Adam Hughes Betty and Veronica book is told in a narrative style by a dog- yes a dog.  In Betty and Veronica, Jughead's long time canine companion, Hot Dog drives the story.  In Reggie, his dog Vader( yes after Darth) is our narrator. 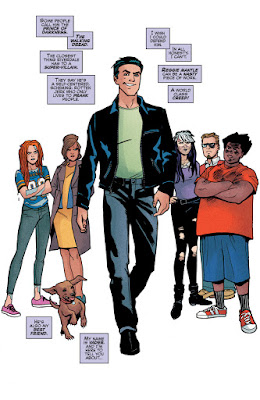 Vader gives us insight as his pet into what motivates Reggie, his love for Midge, and the catalyst for issue #1- a perceived slight from Archie after everyone receives a text from Archie and leaves his party to attend a party at Veronica's mansion. 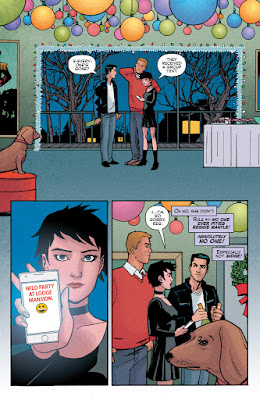 The issue focuses on Reggie not acknowledging his feelings about everyone leaving him and his party and focuses on his revenge for those who have slighted him.  Reggie gets to act and live out all our high school revenge fantasies and he does with a wink and a smile without a perceived care in the world.

And even when Archie attempts to right the wrong of submarining his party, Reggie is having none of it- more offended that Archie would pity him than anything else. 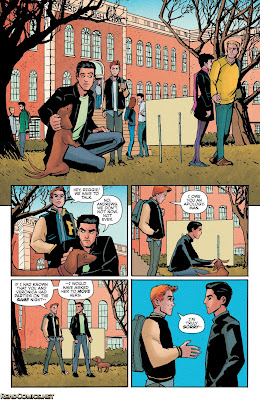 If you are a reader of this blog or follow us on Twitter and Facebook, you know I am quite protective of Archie and characters in the Riverdale universe.  But much like the Archie and Betty and Veronica relaunch, this book is so well written and so true to the core of the characters, its truly one of the best debuts I have read this year.

So Reggie and Me will make it into my monthly pull box permanently.  I would encourage you to embrace your dark side and pick it up, too.

Posted by Brothascomics at 3:59 PM