Every Black Person on Game of Thrones 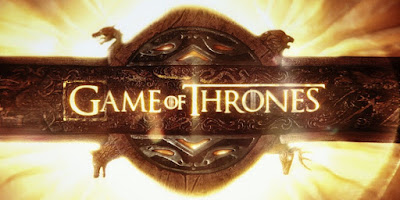 Before we get too far into this, I have to say that I am a late comer to Game of Thrones.  I just began watching the show in 2017- after years of urging from my friends and family.  Overall, I am just not a huge fan of medieval set pieces.  I mean knights and kings and all that are cool, but those pieces are always lacking diversity beyond tokenism and has never really appealed to me.

I am not sure why I finally gave into watching Game of Thrones.  I heard about the nudity which I am a fan of, but I can get nudity on the Internet in a second if I needed it.  More than anything, I think I was just tired of hearing people tell me how good the show was and felt I needed to at least give it a try before saying, " I don't like it".

Long story short, I love the show.  My tag line has been come for the nudity, stay for the drama- which it delivers in tons week after week.  Character development, exciting plots, and hell yes DRAGONS.  Once I started watching it, I was mad that I denied myself this pleasure for the past six years.

All that said, it is striking the lack of diversity on the show. And the diversity that it does present, plays upon existing stereotypes of people of color.  For example, the Dothraki who are people of color led by Kal Drago, are presented as savages who rape, loot, and murder all their conquered people.  I noticed this right away watching the show and it makes you cringe.  Mind you this is a show that has an incest scene within the first 30 minutes and that was less cringe worthy than our first look at people of color as savages.

This all comes up currently because the producers of Game of Thrones on HBO have presented their first post GoT idea to HBO.  Its a show called Confederate ( yeah , I know).  The show premise is based on an idea that the South won the Civil War... in fact it has won 2 Civil Wars and its getting ready for a third.  And slavery has become an institution in the United States.

Of Course the backlash for this idea was met swiftly.  Black folks and many others felt this re-imagined history is wrong- especially under the current political environment where Nazism in THE United States is now coddled under code words such as Alt-Right and Nationalism.  Boycotts of HBO have been bandied about which forced the producers of the show to try and get in front of the press.  The producers of said show want viewers to "give it a chance" and even trotted out two Black producers on the show who they think will make sure the show is respectful to the subject manner.

My feelings on this have not changed since I heard it... this is a terrible idea.  We do not need to see a show where the South won 2 Civil Wars and Black folks are in servitude to whites and in chains- whether those chains are real or imagined. They can say whatever they want about how it will be presented, the two Black producers, etc... This will not turn out well, no matter how they try to spin the narrative.

This got me thinking tho about how they have handled Black people of Game of Thrones. It took me a minute to think of actually SEEING Black characters on the show because they are so rare.  Again, you see more Dragons than Black people.  That's a little more than troubling.

So I went to IMDB and got my scroll on.  Now a show that large, with 6 plus seasons has a ton of cast members and from all of those seasons, I came up with 6 Black people who have had speaking roles on the show.  You will see a common thread amongst them and this should give any person pause to think 2 white dudes- no matter how well intentioned- will come in with biases towards the primary subjects in Confederacy. 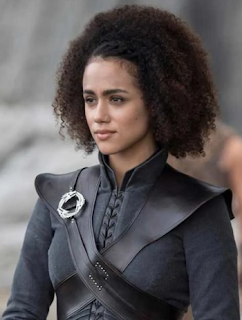 She is Hand Maiden to Khalessi, The Queen of Dragons, Daenerys Targaryen--the lady got alot of titles.  But her upbringing was as a slave and interpreter and even tho she has become a "trusted" voice for Daenery's, she was a slave. 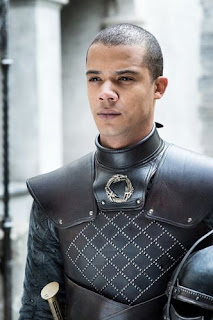 Leader of the Unsullied- a group of Slave soldiers who are eunuchs who are bred to fight and kill. Grey Worm has also risen the ranks under Daenery's but again, he started off as a slave and remains one in his loyalty to the Unsullied and the Queen.  His loving relationship with Missandei is great but he has also been emasculated. 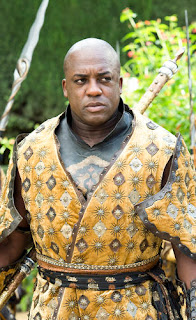 Bodyguard of Prince Doran Martell, the leader of Dorne.  Although not a slave, he is in a servants role as the royal bodyguard.  Hotahs motto is to: Serve, Protect, Obey... that kinda sounds like a slaves motto.... 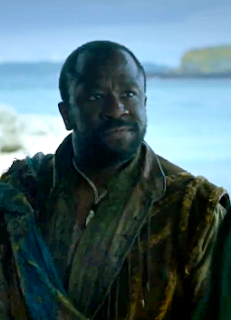 Pirate. Recruited by Ser Davos to help with ships in the Battle of the Blackwater for Stannis Barratheon.  He is not a slave.  Just a thief. 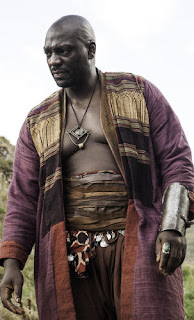 Slave trader wandering the lands of Westeros looking for people to capture and sell.  Probably most known for selling Jorah into slavery to Mereen and wanting to cut the dick of of Tyrion the dwarf because he heard an dwarfs dick bring you good luck.

Xaro said he was the wealthiest man in Qarth, but he was actually just a hustler who had no real assests and when it was found out that he had nothing, he was sentenced to die in the vault of empty gold that he lied about. Not a slave tho, just a liar.

So we can breakdown all the Black people on Game of Thrones to either slaves, former slaves, liars, and cheats.  We could also talk about the colorism of Missandrei and her glass ceiling with the Queen.  We can talk about the lack of any other Black Women of note in Westeroes.  We can talk about 7 kingdoms with no real people of color ruling. Hell,if you wanna get real, we can talk about how a white woman freed all the slaves.  As great as this show is, these are all very real issues that happen on Game of Thrones, yet people want us to trust that the producers of Confederate are going to be fair in the handling of Black people, slavery, and white supremacy?  Man get out of my face with that mess!

So forgive me and people when we say, "To hell with Confederate" and "To hell with the producers and HBO" for thinking anyone would or should see a show in celebration of White Supremacy.

April Reign (@aprilreign), creator of the #OscarsSoWhite, created a #NOCONFEDERATE to let the producers and HBO know that this show is not needed or wanted.  The # was used during Game of Thrones this weekend and was the #1 trending # during Game of Thrones. Of course, April and others, were greeted with the typical response from people that Black people are practicing "censorship" or we are "stifling creativity" or "judging the show before it comes on" and my personal favorite " just give it a chance".  All the while ignoring the reasoning behind why Confederate is a horrific idea.

Even through all this negative press-HBO and the producers behind this show- continue to move forward with this project.  Even the president of HBO has come out and said the show will move forward even as a large portion of their viewing audience rejects the idea and the premise.  It sadly proves a point that marginalized peoples pain is often just entertainment for white people and they will defend their right to watch us humiliated under the guise of free speech. I truly hope this show never happens and people come to their senses, but history of this country and the history behind Game of Thrones doesn't give me much hope.