While Big Hutch was getting his swerve on out in San Diego for Comic Con, the kids and I jumped in the car and headed 90 minutes south to Tate's Comics for their Not at Comic Con Comic Con event.  This is the 8th year of the event, but the first time I was able to attend since I moved back to Florida.

The premise behind the event is that Comic Con is a nerd paradise but only so many people get a chance to attend.  NACC allows the customers of Tate's to have a little fun pretending to be at Comic Con.

The event began at 12 and my kids and I got there early- maybe around 11:00. We looked to be 3rd in line.  There was news there was gonna be swag bags for the first 500 customers and we wanted to make sure we got one.  The doors of the store opened at 11;00 but the line outside the store was not the line for comic con.  Customers had to walk through the store until 12 and then around that time- at a place unknown to the customers, the Line to Nowhere would begin.

In that hours time, I wondered the store looking at all the goodies Tate's has to offer.  I have been coming to this store since 1996.  I've seen it grow from two different locations into literally one of the finest comic book stores in the United States.  I even had a great conversation with Tate before the event began.  I had not consistently been in the store in over 10 years and Tate still remembered me and that kind of personal service and relationship is not found in every comic book store. 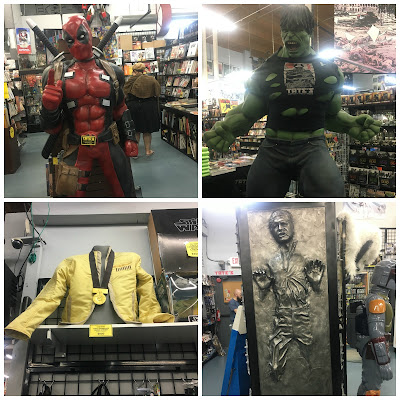 As the clock tick-tocked, we happened past a small nook in the store and this was the beginning to the Line to Nowhere. We hustled in quick and wound up being 12th in line.  Not first but definitely in line to get our swag bag on.

Once the Line to NoWhere began to move, we picked up our bags and headed over to another event being held in the Tate's Gaming Satellite.  This portion of the Con held many local artist who were drawing for the fans in attendance.  The store also had a Comic trivia contest going on, as well as the premiere of the Tate's Comics movie.  The swag bag consisted of comics and other nerdly knick knacks.  My glow in the dark tesseract sits in my office!  Thanks Tate's!

There were many cosplayers all around- from little kids, to big kids, and to even dogs were all dressed up for the event. 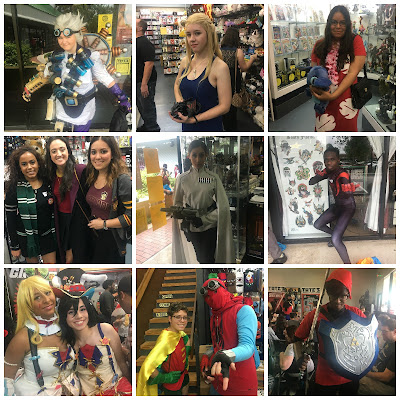 At the end of the event, there was a cosplay parade and a big photo shoot of all the cosplayers in front of the store.  This was really an awesome event to attend with my kids.  I was able to catch up on some comics, see some old friends, and enjoy this nerd awesomeness without having to fly to California.


Honestly just a wonderful experience for me and my kids.  If you live in South Florida, I would highly recommend Not at Comic Con Comic Con! And also make Tate's Comics your source for all things nerdly!

Posted by Brothascomics at 6:19 PM