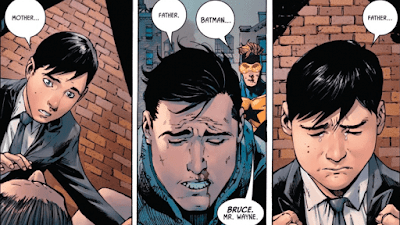 As I was checking out some comic book news, I ran across this recap about what is happening in the current run of Batman.  First off, let me just say, I am not a Batman fan so to speak.  I get why people like him and why he is the face of the new DC.  He is cool and the anti-hero and people flock to characters like that now.  its why he has passed Superman as the flagship for DC fans for the last 20 plus years.

I did read the Snyder- Capulo run on Batman because the art was amazing and the story was somewhat fresh for me.

On the Marvel Hacks we did a review of the most recent relaunch and I was pretty much out because the writers of Batman have just gotten to this point where anything is possible for Batman( even given enough time). I have called it that Batman Bullshit.  And in issue 1, he is on top of a plane steering it in between high rise buildings and meets Gotham Man and Gotham Girl.  I was out and really have not paid much attention since then.

Well, it seems that I may not have been too far off staying away from the book.  And the article in Dan of Geek reaffirmed that.  First off, no matter what anyone tells you, Booster Gold is an ass cheeks, terrible character.  So him being in the book is already a problem.  And to compound this problem, DC allows him to go back in time and in a convoluted way, cause shenanigans with Batman's origin story regarding his parents. I am not gonna spoil it because you can read the article yourself, but I will say this- why mess with his origin story?  Plus, all they are going to do(already did) was retcon it anyway.

I swear, the DC people love to torture Batman and Bruce Wayne and Bat fans love to see him be tortured.  Its an abusive relationship at this point as his character has not evolved as much as he as devolved.  Sure he has a son now( who is an asshole) and he is getting married which seems like stunt casting that will end sooner than later- but the essence of the character is troubled Bruce and Batman without him being able to grow past his torturous origin which they keep fucking with.

So good luck Bat fans watching and reading this mess. I am sure we will discuss this on the Marvel Hacks- Big Hutch loves him some Booster Gold.  But, man let that poor (Bat) man have some peace.

Posted by Brothascomics at 9:21 PM