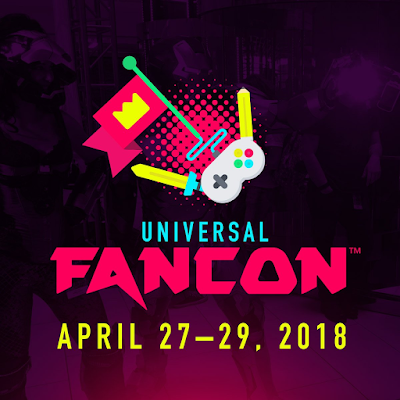 At work on Friday, April 20, I am sitting in my office in between lunch periods really just waiting for the day to end.  If you follow me on social media, you know I work in education at a high school and 4/20 day is not an easy day for schools.  Between the national walk out day and the 4/20 Smoke Out Day, it had been somewhat stressful on administration.

I come into my office and pull out my phone to check my email at brothascomics and I see a message from Jamie Broadnax- the head of Black Girl Nerds- one of the most influential sites in Blerd culture.  I have never met Jamie and was kinda puzzled as to why I was getting an email directly from her.  So I opened it and saw that Universal Fan Con had been postponed and I was stunned.  FanCon was to be the next weekend and the event was being cancelled a week out.  I immediately went to Twitter to see if maybe I( or they) had been spammed.  In my mind, I thought there was no real way they were gonna cancel this event so close to the actual opening.  Twitter was initially silent about it which made me think it was spam.  I tweeted a couple of people I know and trust on Twitter and they had not heard anything either.


Maybe an hour or so later, the floodgates burst and all the tea just began spilling out about the Fan Con debacle.  It seems all that Kickstarter money, whatever money they had made from pre-sales, merchandise, etc was not enough to cover and pay for the event that weekend. People were shook and still are.  Reading the tweets and information that came out during and after has sent a ripple effects through the Blerd Community.  People have lost trust, jobs, money, and friendships over this.  And really for what?  Pride, ego, and hubris.

From what it sounds like, the people running FanCon wanted the first year of this event to be a big, special event celebrating diversity within nerd culture.  No one disputes that POC, LGBTQ, women, et all are all underrepresented in the culture of comics, sci fi, gaming, etc.  FanCon was to help bridge that gap.  But piecing together information that has come out, it looks like in all this planning, no one had the big picture involved.  It seems that organizers wanted to stunt to make this event about themselves and how it was gonna help their brand- forgetting all about the fans who bought into the purpose of FanCon,

Info from affiliates and those who are being transparent show that the con was in serious trouble in early February.  There was talks that maybe the event should be scaled back or even at that time, postponed.  For whatever reason, which I am sure will come out eventually,  the organizers decided to push through and the thing collapsed around their feet leaving in its wake pissed off fans and creatives who put their money and heart into FanCon.

Now what?  Brands have been severely damaged.  Peoples names is being dragged all over the place and, trust in starting or funding a Kickstarter for similar events or projects is now trashed.  If the founders of FanCon run that money to all the people, that would be a start.  If people came out and said" yeah, I fucked up". That would also help but early in this crisis has been a lot of hiding and passing the buck with very little accountability.  As of writing this, many women writers from Black Girl Nerds have resigned as did the founder and President, Jamie Broadnax.

This has been alot for me- no matter how many jokes you seen me get off on Twitter. As a Blerd who has a very small imprint in our community, FanCon did mean something to me.  I was an original Kickstarter backer. I didn't donate much, but I did put some money down.  I had originally planned to go to the event, but had to back out because of financial constraint brought on by a medical situation with my mom.  But Brothascomics was still gonna represent with one of our supporters being there for the weekend.

Its a shame because the idea behind FanCon and its purpose still hold true and strong.  Marginalized people are still underrepresented in this genre and having  a safe place for that is needed.  We just put our faith in the wrong people.

Posted by Brothascomics at 11:30 AM