As DC has rolled out their Rebirth line, some books took a bit longer to debut. Teen Titans is in wave 2- along with her other teenage based superhero books such as SuperGirl( review coming).  This new Teen Titans picks up after the alleged death of Tim Drake(Red Robin).  Each Titans member has been dealing with their grief in their own way.

Beast Boy has decided to become an actor out in Hollywood and is burying his feelings in partying.  As usual, Beast Boy has no game with the ladies and his immaturity always gets the best of him.  He also does not realize he is being watched and is quickly captured by a mysterious figure. 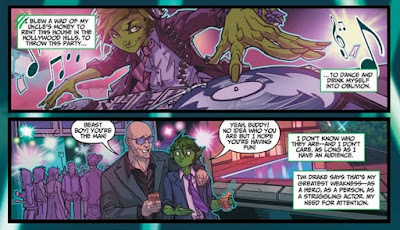 StarFire has moved on to dedicating her life to fighting for children.  She has moved to the Island of Tornado- because its tropical weather reminds her of home and is working on shutting down a child trafficking ring.  As she moves to stop a child from being abducted, she is also captured by a mysterious figure. 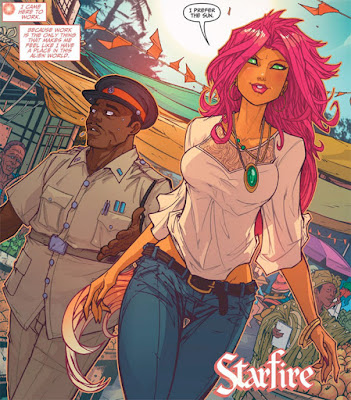 Raven, prefers the solitude of museums as they give her a break from constantly hearing the thoughts of others.  As usual, she is afraid of fulfilling her destiny of being the child of Trigon and is frightened by an image created at the museum.  In her attempt to escape, she is also captured.


Lastly, Kid Flash, AKA Wally West, is breaking up crime in his city and is very philosophical about his place in the Flash universe. In an attempt to rescue a homeless person, he does not see its an actual trap and he is captured as well. All of our heroes are trapped and brought together by this mysterious figure- who really isn't mysterious as he is featured prominently on the cover- Its Damian Wayans or Robin or The Son of Batman who has brought the Titans together- but for what reason?

The book is a very short and easy read.  Your enjoyment of the book moving forward will probably be based on how you feel about Damian Wayne.  I do not like the character. I never have.  They gave him such a huge push when he debuted and the character is such a dick. They have made it virtually impossible to actually like him. Overall, I will probably not continue with this Rebirth title.  I do enjoy the Teen Titans but I'm now down with the Son of Batman and chances are he and his stories will dominate the Teen Titans so I will pass until Red Robin returns( hopefully).

Posted by Brothascomics at 4:04 PM