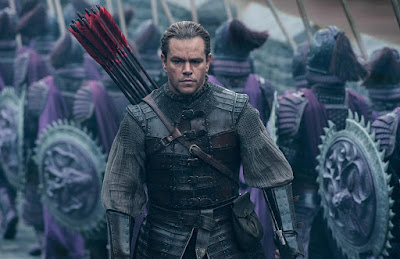 With New York Comic Con ending last week, we were treated to great cosplay, teasers and trailers for upcoming events, and unfortunately, a Q&A of white tears and feelings from a so- called ally named Matt Damon.

I am going to be real with you- I have never been a fan of dude. Not really sure why, but I never really understood why he was famous. I mean he has made some ok movies, but he takes himself way too seriously and his fake sincerity is vomit inducing to me.

His sincerity towards issues in film regarding people of color took a huge beating when he whitesplained and mansplained to Effie Brown on how to cast a movie of color and made himself look like a fool.  In case you forgot, here is that awful moment:


You would've thought he learned from that and he went on the white man apology tour after trying to explain it was the editing of the show and the producers who made that look worse than it was... forgetting to mention that he is the executive producer of the damn show.  Man get the fuck out of here with that excuse.

As we move forward in 2016 however, Matt Damon has a movie coming out called the Great Wall.  The original teaser trailer about a movie, set in China with a monster is kinda a cool concept.... until Matt Damon shows up looking like a broke ass Legolas.  Of course, the people of twitter were all over this racial trope of white savior character. I mean, there are hundreds of millions of Chinese people, yet they need this 1 white man to turn the tide against the monster?  Its a trope repeated over and over in movies and the idea that China would need this dude is preposterous.  This coming on the heels of the whitewashing of Ghost in a Shell with Scarlettt Johansen and Dr. Strange and this had people( especially POC) kinda frustrated.

Not much positive has been said about the movie since the trailer dropped, but Hollywood has to Hollywood and Damon has to do press for this movie so he was at New York City Comic Con to promote the film- and of course he was asked about this.  Now, like Jesus in the New Testament, we gonna put Matt Damon's words in RED since he wants to play savior and we will dissect his statement line by line

Speaking at the New York Comic-Con, Damon addressed the ‘whitewashing’ claims, saying “It was a f**king bummer,” adding that the cast felt “wounded” by the backlash.

So his initial response was in his feelings about being bummed out and wounded that people brought up a legitimate issue. Now this man went to Harvard so allegedly he is intelligent and instead of helping the situation, he doubles down on whitesplaining

“To me, whitewashing, I think of Chuck Connors when he played Geronimo,” he said according to ScreenCrush. Speaking about the initial teaser, he added: “They’re trying to establish a number of things in 30 seconds or a minute or whatever they have; it’s not a full-length trailer, it’s a teaser.

Again, choosing not to address the legitimate concern, he gives a throwback to a time long ago with a white man playing Geronimo( which was also bullshit).Basically saying, "we're not that bad." No its just as bad-if not worse because with your star power and so called ally status, you have the power to make change and make sure this type of shit does not happen.  But you didn't choose that- you chose to take a check and continue the trope.  Then he uses the Hollywood machine as a reason for this continued bullshit!

“They’re trying to tease the monster. They’re trying to speak to a bigger audience. ‘You probably don’t know who this director is in Middle America, the Steven Spielberg of China. Don’t worry, they speak English in this movie’ – you hear my voice speaking English. ‘Don’t worry, Matt’s in the movie, you’ve seen this guy before.’ So they’re trying to establish all these things. And by the way, there are monsters. So there’s a lot of pipe they’re trying to lay in that 30 seconds.”

I love the "laying pipe"analogy because they are literally trying to fuck us with this excuse So now he is saying they have to sell the movie to Middle America( white people) and that is why he is in the movie( speaking English of course). And he name drops the Chinese director, but of course compare him to a white man.  And really, that is the problem in a nutshell.  White people have a huge problem seeing anyone non- white in starring roles and especially roles in science fiction and fantasy. White people view this genre really as their last frontier as if they left all the niggas back on earth  while they rule the day in Middle Earth and any interloper is treated with disdain and hostility.

Then to complete the bullshit sundae, he drags the other non Asian co-star into it and tries to use sarcasm to make everyone feel better

Damon revealed how co-star Pedro Pascal (Narcos, Game of Thrones) called him soon after the first teaser was released to say: “Yeah, we are guilty of whitewashing. We all know that only the Chinese defended the wall against the monsters when they attacked.”

Look Matt Damon and those who look, act, and think like him- We know its a movie. We know there is no monster that the Chinese are fighting.  We also know that is not why the Great Wall was built and we also know that it was built to stop invading forces from other countries-especially colonizers who looked like you Matt Damon from getting into China.  Because as soon as colonizers got there, they want to run shit like they were the originators.  This is utter bullshit and the only people you are fooling with this are white fans who live out their fantasies through these movies and who are so myopic, they can accept dwarfs, elves, and halflings more than they could accept a Black man playing Thor.  Its white privilege at its finest and this so called "ally" is continuing the bullshit instead of stopping it.

This frustrates the hell out of people of color. Any talk of characters in sci-fi/fantasy or comics being black or a female, brings out all the white male fans who are clutching their pearls about canon being changed and "staying true to the character". Man, shut the fuck up!  Its a movie! Its fantasy and white people don't own the right to have only their version of their fantasy on screen or in comics.  The world is bigger than straight, white men and its high time they get on board.

So no- @brothascomics will not be seeing Great Wall and Matt Damon is on the " I can't fuck with him" list moving forward.  I am sure after this bombs, he will do and apology tour again, but sadly him and his ilk will learn nothing from this and probably blame the Chinese for not co-signing their bullshit because of course, the white man is never wrong.

Podcast on ITunes
Posted by Brothascomics at 11:09 AM