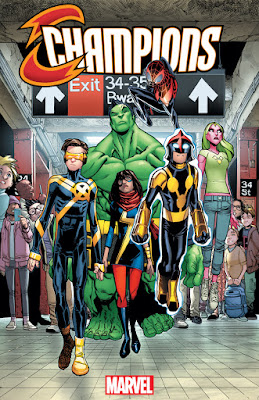 Stop me if you heard this story before.... the younger versions of adult super heroes become fed up with their counterparts and break free to form their own team that is going to be different than the adults.  Whether its the Teen Titans, or Young Justice, The New Mutants, or the Young Avengers, the teenage team is an age old comic book trope.

Champions #1 continues the trope as we see a team of teenagers break away from the Avengers and form their own team known as the #Champions.  The book opens with the Avengers being heroes in New York City against an unknown villain.  After they are successfully in saving the city, the citizens are unhappy that the city is destroyed and Ms. Marvel feels the Avengers should help with the clean up as well as the super hero stuff.  Her request is rebuffed and she becomes upset and quits the team and sends a text to two former Avengers- Nova and Spider-Man( Miles Morales). 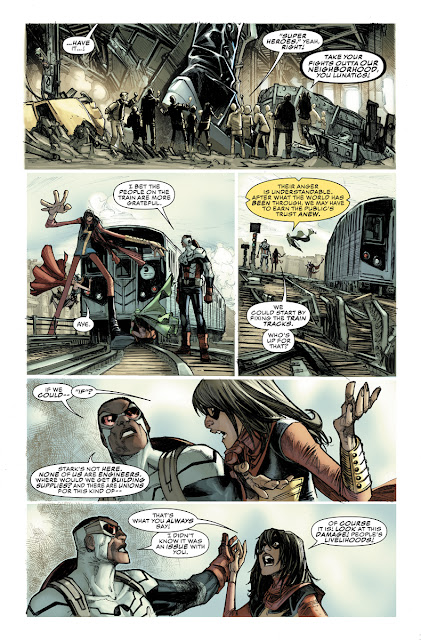 The heroes meet and decide to form their own team and are off to recruit other teenage heroes for their cause.  The first draft pick is Totally Awesome Hulk- who is off rescuing miners trapped in Kentucky.  Of course the team uses teenage super teamwork to save the day( and the miners) and of course they help put the mine and town back together.

The next draft pick is Viv- the daughter of the Avenger Vision, who is hooked into a super wi-fi network all across the world.  Viv could serve as their Oracle to find events that are happening that would require Champions attention.  Of course, there is a situation happening right now and the team is dispatched to the final battle against an unnamed sex trafficking clown( no, really).  The team again uses super powered teenage teamwork to save the girls and stop the sex trafficking clown.  Sadly, one of the girls did not survive being trapped and died and the crowd that has gathered wants vengeance and The Totally Awesome Hulk almost gives it to them... before Ms.  Marvel stops him.  The funniest part about this is she states she is going to give a speech- but then proceeds to give a 5 panel speech about how they are going to be different than the adult heroes.  This leads to a a call back page to all the heroes who will make appearance in the book- including Iron Heart, Cyclops, Moon Girl and Devil Dinosaur, and what appears to be some teenage versions of Wasp and Falcon.

The book ends with #Champions as all our heroes are checking their phones.  Sigh, look, I hate to be that old dude but Ima do it.  The idea of teenage super hero teams is so played out.  I mean, its as dead as dead can be. I never understood the appeal in modern comics because who is the audience for this book?  Are you looking for new pre-teen/teenage readers of comics?  That would be great if there was a large audience of teens reading comics( which there is not).  Most comic book readers are like me( old, with a job to pay $4.00 for a comic book). And most older readers, like myself, roll their eyes to see a team formed and #hashtags being used to spread the good word of the team.  Its hokey and I would imagine teenage me woulda found it hokey too.  What it sounds like is a middle age man( Mark Waid) writing about what he thinks teenagers would do.  Its pandering at its finest and I thought the book was a poor start by an excellent writer. 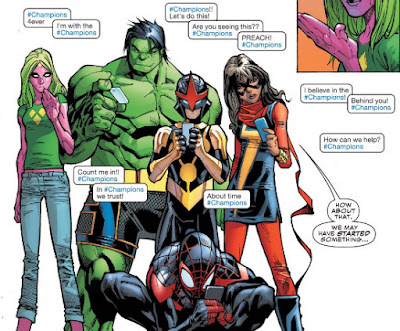 I will not be continuing with #Champions.  Possibly my pre-teens will continue to read it- but that will require me giving them $4 for the book and that's #nothappening

Posted by Brothascomics at 3:15 PM