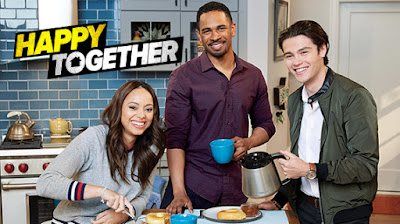 On CBS, new show brings New Girl and Happy Endings actor, Damon Wayans, Jr back to sitcom tv with a new sitcom called Happy Together.  In the Pilot, Wayans Jr plays Jake, an accountant who lives with his wife, Claire in a suburb in Los Angelas. The couple is a typical, childless couple that spends most of their time in the house, ordering in, and binging shows on television.

In a tv plot twist, Jake's accounting firm has a famous client, rock singer named Cooper James, who dates another famous singer to form a millennial hit couple.  When that relationship hits the rocks and the paparazzi come calling, Cooper flees to Jake and Amber's house to hide out.

Typical fish out of water and CBS sitcom situations abound.  An excessively loud laugh track, corny jokes about being old, and a wacky neighbor couple- in this case, Jake and Claire's in laws come to stir things up. These are staples in the CBS sitcom world.

When Cooper gets back with his girlfriend, he is miserable and Jake and Amber go and rescue him and invite him to live with him as he looks to get his life back into order.  This pilot/show is loosely based on the life of Harry Styles, formerly of One Direction.

Overall, this was a terrible pilot.  The jokes were really stale, and Wayan's Jr is funny but is really close to putting on a minstrel show in his look and behaviors.  It was quite disappointing because he was so good and measured in Happy Endings and The New Girl, but those shows were well written and thought out.  Happy Together... not so much.

I will not be surprised if this is a hit on CBS, tho because the older, white demo that watches CBS loves to watch Negroes coon it up for them.  Its a hard pass for me tho!

Posted by Brothascomics at 12:26 PM