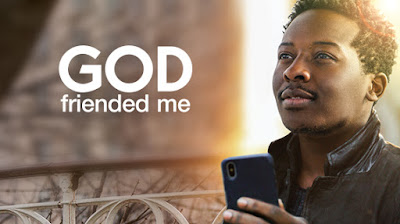 CBS has a long history of courting religious people with semi-religious programming.  Its a part of their model to appeal to older, white Americans and one of the reasons CBS is the most watched television network.  Those white viewers love procedurals and drama's that have a moral( in their mind) right and wrong and an hour later, the bad guy loses and the good guy wins.  Like it or not, its their winning formula.

All the way back to Little House on the Prairie to Dr Quinn to, Promised Land, to Touched by an Angel, CBS has always flirted with overt religious themes in their programming.  This new entry, God Friended Me stars Brandon Michael Hall, who was on the criminally underrated, The Mayor on ABC last year.  He stars as Miles Finer, a young, atheist, who is one day friended by God.  Of course, he deletes the request but it keeps coming, as well as requests from people who keep popping into his life to help.

I am a little bothered by the idea of the Magical Negro.. a television and movie trope that always places God/religion on Black people as they help white people on their spiritual journey.  The twist with him being an atheist is interesting, but the foundation of Magical Negro is still there. And I wonder, if they will explore the potential romantic relationship between Miles and Cara as they are clearly the two leads.

Of course Miles thinks this is some crazy plot by unknown folks trying to sabotage his success as he is looking to get his podcast onto Sirius XM.

His friend group includes. Rakesh and Cara, a woman placed in front of him to help him on her "spiritual" journey of forgiveness of her mother.  Overall the show is carried by Hall. His charm and acting elevate the show and its shaky premise.  The shows themes are relatable and I can see how the people at CBS thought this show would be a hit with their audience.  Plus, it reaches their diversity mandate with a Black lead and a supporting cast member who is Middle Eastern.

For me, as a person who was formerly religious, its a no for me, but I would definitely recommend this show to my more religious friends.

Posted by Brothascomics at 11:13 AM