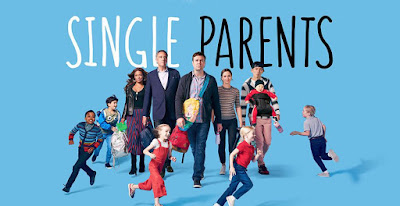 As the fall tv season gets into full swing, Brothascomics is giving reviews to some of the tv shows out this season.  First up, from ABC Single Parents.  This show is executive produced by Elizabeth Meriwether,  most recently known for the New Girl which ended its final season this past spring.

The ensemble cast is led by Saturday Night Live alum Taran Killum who plays Will Cooper- a recently single dad and father of a first grader.  Since his wife left him, Will is overly involved in his child's life outside of school and inside school as the room parent and PTA chair. His goal is to get all parents to be involved just like he is.  He is met with resistance by a parent group who is not trying to do any extra work.

There is Angie played by Leighton Meester,  who is single after her husband left her and who has a super clingy relationship with her son and is cut off emotionally from other serious relationships.  There is Poppy, played by Kimrie Lewis who has a son and owns a local wine bar in town.  Her ex is not discussed in the pilot.  Living with Poppy is Miggy Park, played by Jake Choi.  Miggy does not have a child in first grade, but has a new born son and its not fully explained why he is living with Poppy.  The last of the parental crew is Douglas, played by Brad Garrett.  He is a Dr and the father of twin girls and is older than the rest of the crew and quite cranky.

The pilot brings the crew together with a plot involving Will wanting to get the other parents involved and them resisting.  The jokes are quick and you can miss them if you are not paying close attention.  The show is witty, fun and fresh and if you are a fan of shows like the New Girl and Parks and Rec, you will enjoy this show.