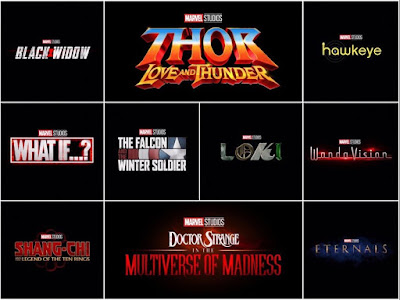 Marvel came back to Hall H for a huge presentation after taking last year off to present at D23.  MCU fans had been skeptical and confused about what direction MCU was headed in post Endgame.  There had been the Eternals and Black Widow movies announced but outside of that, everything was speculation.  What about Black Panther 2 and Captain Marvel 2?  What about Fantastic Four and X-Men?  Well Marvel came out swinging!  Lets look at the major announcements and you might want to get your credit card ready to order Disney Plus because you gonna need it!! In no particular order...

The movie comes out in 2020 and takes place in the time between Captain America: Civil War.  The often referenced Budapest scene will be addressed so I am sure Hawkeye is in the movie and we have Taskmaster as our villain.  For me, I am not that excited about this.  One Scarlett Johanssen has been problematic AF and this movie shoulda already been made.  Why are we going backwards in the Avengers Saga?
Verdict: I will not be seeing this in the movie theater.  I cannot with ScarJo

In my years of reading comics, I have never gotten much traction with the Eternals.  Their function and purpose in comics and now in the MCU does nothing for me.  The movie has a great cast and I am sure their movie is a set up for bigger things to come in a post-Thanos world.  This has an Inhumans feel to it tho.
Verdict: Will probably see it. Too soon to tell.

The Thor MCU movies are probably the most debated in terms of quality of all the movies.  Many people like the first one and hate the second one.  Ragnarock almost started fights with the folks at Brothascomics.  This 4th movie is bringing back Thor and Valkerie and the huge announcement that Natalie Portman is coming back as Jane Foster AND she will be Thor- a straight up storyline from the comics.  I am sure this pisses off white fan boys who had found their spirit animal in Fat Thor which makes me delight even more in their pain.
Verdict: Not a huge Portman fan, but a huge fan of Lady Thor comics and if they can bring that energy, this movie will be awesome.  Definitely gonna see this in the theater.

Speaking of hotly debated.... Jeremy Renner.  Personally, I like the actor, even tho they have never come close to capturing how awesome Hawkeye is in the comics.  He is basically Captain America in the comics.  Now, on Disney Plus, he gets his own series and it looks like a hand-off to Kate Bishop to be the new Hawkeye and I am all for that.  If you did not read the Matt Faction run of Hawkeye, go read it now.  Should be fun and interesting and possibly a lead up to the Young Avengers
Verdict: Definitely gonna watch!

An animated series for Disney Plus based on the comics of the same name which deals in What if situations from established stories.  It appears all MCU actors are lending their voice talents to this project which give it instant credibility.  Hopefully the animation matches up as Marvel is leagues behind DC animation.
Verdict: Definitely Gonna Watch!!

The Falcon and Winter Soldier

I should not even have to tell you this is a definite watch.  Black Captain America. Period.  I know some people hate on Anthony Mackie but I'm here for him with this.  Sebastian Stan in back as Winter Soldier and masked Baron Zemo is coming as well.  The chemistry that Sam and Bucky have is great and I have high hopes for this series.  Its the one announcement I am most excited about and you know damn well Steve Rogers is gonna show up!
Verdict: Nuff said

Loki
Man I love Tom Hiddleston but I have no real use for this series.  Loki's fate after Endgame is for sure interesting and I am sure he winds up in the 4th Thor movie somehow. I just don't have a real interest in seeing it.  I am sure someone will tell me about it tho.
Verdict: Ima pass until told otherwise

Title aside, this seems to be interesting as we get to explore the relationship between Wanda and Vision.  How they gonna put some life back into his caved out husk of a body will be interesting as well.  But the biggest news coming out of this show was that actress Teyonh Parris will be playing Monica Ranbeau AKA Photo.  That puts us ever so closer to the Ultimates!  All we need is Blue Marvel and America Chavez and I am beyond excited about this!!!
Verdict: Bitch yaaasssss!!!!!!

Shang Chi and The Legend of the 10 Rings

My knowledge of Shang Chi could fit in the Monopoly thimble.  For real!  But I am open to the idea of reading more about him and the actor cast as Shang Chi is Simu Lui, from Kim's Convenience and I like him a lot.  Plus we get the real Mandarin and not the bullshit they tried to pass off in Iron Man 3.  You have to wonder is this movie a one-off or the set up of a series of movies to a larger event like Phase one!
Verdict: I will probably see it!

Dr Strange and the Multiverse of Madness

I was not a huge fan of the first Dr Strange movie.  His incarnations in Thor 3 and the two Avengers movies tho really showed how powerful he is.  This movie is also gonna star Scarlett Witch and you gotta think we maybe get a No More Mutants situation but in reverse. Word is this might be a horror movie, too.  If that's the case, if you know me, I wont be seeing this movie ever because I don't mess with horror.
Verdict: If not a horror movie, yes.  If a horror movie, hell to the no!

Look, Blade started it all and Marvel and the MCU need to give Wesley a big ass check to help pay off his taxes to the IRS.  And I know people wanted him to come back and have a role in the MCU now but Wesley approaching 60 and even tho Black don't Crack and he is in great shape, its time to pass the mantle.  I was thinking they was gonna do a show on Hulu with Blade's daughter but Marvel said, "bump that shit" and went out and got 2x Academy Award winner Mahershala Ali to play Blade. To say I was amped would be a huge understatement!  And I hope somehow they can get Wesley Snipes in this movie to hand the mantle over and introduce Fallon Grey as Blade's daughter.  Well done Marvel!!
Verdict:  Bring it all on!!!!!

So Phase 4 is in full effect even without the Fantastic Four or the X-Men.  Marvel goes to Hall H and steals the con again as DC didn't even bother to try.  Gonna be a hype next 3 years and I am all for it!!

Posted by Brothascomics at 3:02 PM