Did Marvel learn its lesson? 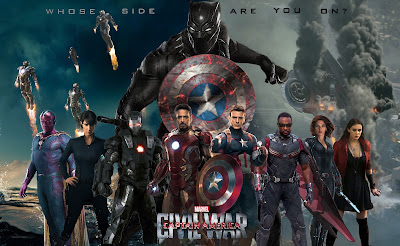 By now, you have probably seen the trailer for Captain America:Civil War.  I would imagine most Blerds and Bleeks have seen it since it has over 100 million views on yotube.  I know I have watched it probably 5 times and it made me quite hyped for the movie.  I even recorded a trailer review which you can find here:

However, when my hype died down and I went into my quiet place, I began to feel uneasy because of the mess that was Avengers Age of Ultron.  That movie, although cool in certain parts, was an overall disaster.  Too many heroes, with a plot that was all over the place, and seemed to be made with the overall intention of selling toys. The constant trailers and product placement ads for soda, cars,  and merchandise, made the movie seem secondary to making money OFF the movie.  The trouble and friction between Marvel and director, Joss Whedon, are well documented, as it seems Marvel got overly involved in the production and crushed the directors overall Vision( see what I did there) for the franchise.  The movie suffered for this and it eroded much of the goodwill Marvel had with fanboys after the original Avengers.

Now they get a second chance with Civil War, but you can see some troubling similarities.  There are a ton of heroes in this movie!  I mean between Team Cap and Team Iron Man, you have 10 heroes. That does not factor in villains( at least two with Crossbones and Zemo) and other ancillary characters such as SHIELD, Nick Fury, Maria Hill, Thunderbolt Ross, etc! Possibly because the movie is still a few months away, we have not seen all the product placement surrounding that  AoU. Are we going to see Captain America plastered on cereal boxes and soda cans and driving an Audi or Chevy? I don't know?  But maybe Marvel learned its lesson. Maybe?  Could it be possible that they saw all the clapback from fans about AoU and kept their grubby little hands off Civil War?  Is it possible that they trust the Russo Brothers and writers of the this movie to allow them to tell their story without getting involved in every single detail?  You see fanboys, although annoying at times, are smart.  We know when we are being given shit to eat- even tho you tell us its Caviar.  AoU was shit!  Marvel tried to dress it up as Caviar and give us "moments" in the movie that would make us excited, but overall the movie was shit.  And the stink of that shit has hung with us for the last year!  Its why there is a bit more trepidation for Civil War!  And you really have to wonder if Marvel feels that, too.

Now don't get me wrong, its not like I am not going to see Civil War. I will be there opening Saturday with my family after Free Comic Book Day just like I was last year.  I will still be hyped and ready to go with popcorn and candy that I snuck into the movie!  But, if I start to see Captain America Dr. Pepper ads,  Black Panther Shampoo, Iron Man Chef Boy Ardee Ravioli, and Civil War Cereal before the movie opens, I will know that Marvel doesn't give a shit anymore and this movie, much like AoU, will just be a vehicle to make more money and the movie is an afterthought.  That's a real shame, too because the Civil War has the potential to be the best comic book movie Marvel has made.  I truly hope they don't fuck it up!

Posted by Brothascomics at 10:45 AM