We all have fan blindspots 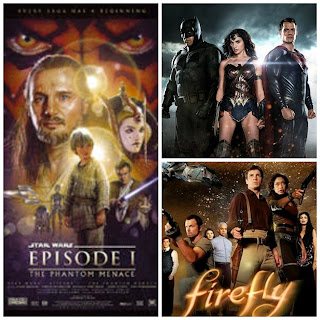 Picture the scene, May, 1998, a young Producer has skipped work to attend an afternoon screening of Star Wars: The Phantom Menace.  I was excited.  I had been waiting for this movie for the 20 plus years since Jedi had come out.  I had already spent loads of money on toys and merchandise and I had gotten my tickets 2 weeks before this screening.  I was beyond hyped!  It was hard to contain myself in my seat.  Then the theater goes dark and that John Williams theme drops and, if I was someone who cries, I woulda cried like a baby!   And the movie starts and its a spectacle- especially the FX. And you get all the light saber battles, and Maul, and Sidious, and the hints of Vader with young Annakin.  But you also get Jar Jar and awful dialogue and what the fuck are midiclorians anyway?
At the time tho, no one could tell me shit.  It was Star Wars! It was back and I was happy.  Now 1998, everyone did not have cell phones, there was no Twitter, or Facebook. At the time, you lived and died on news and fanboy interaction in chat rooms and message boards.  And most fan reaction to Phantom Menace was not as enthusiastic as mine.  In fact, some people hated it. I mean HATED IT! And as much as I tried to defend it, no one was trying to hear me. I was like, "Fuck them, they stupid!" So I went and saw it again. And Again. And I even copped a bootleg video copy in English( with Turkish subtitles).  No one could tell me that Phantom Menace was bad......Except that it was and is a bad movie.  Possibly the worst of the 3 prequels-which are all flawed.

I tell this story because I see the similarities in my defense of Phantom Menace with people defending Batman V Superman.  Now, Batman V Superman is leagues better than Phantom Menace- that is not my comparison.  My point is blerds/nerds will turn on each other and defend their flawed heroes, comics, movies,  and tv shows to the death when they feel that other people do not like what they like.  They say shit like, " You just don't understand", or " The movie was more complicated than you think" and often times they are flat out wrong.  Look, most of these movies- especially comic book movies are not breaking atoms in their depictions of our beloved characters.  People go to movies to be entertained, not to think.  That is why Transformers can make a billion dollars worldwide- not because its any good.  Its just mindless entertainment!  Yet if you tell the wrong person/persons that Transformers is stupid, @realOptimusPrime will attack you on Twitter and call you a moron because you didn't like that stupid movie.

Stop! I mean really, STOP! Look, I did not like or hate Batman V Superman.  I thought it was ok.  To me the movie was a mess- attempting to serve too many masters.  The movie took 3-5 comic book plots and tried to cram it all in one movie and it made the movie messy in terms of flow, storytelling, and length. I really do think there is a good movie in there at about 2 hours and 10 minutes( instead of 2 hours, 40 minutes). But people are going to town on this movie about how its so great and its the best comic book movie ever.... Sorry, I can't roll with that.  But you do you!  One of my biggest mantras that has come with age is that you should "Like what you Like".  If you like it, fine.  But don't try and convince me that I should like it and don't try and convince other people that they should like it.  If you like it, fine.  Be secure in your opinion why you liked it and move on.

I hate that in society now we have "Embraced the debate".  This culture creates a system where people feel the need to convince you that they are right, and you are wrong( as the other person does the same).  This causes people to take the extreme opinion on anything and everything to attempt prove their point. And blerds and nerds are the worst at this.  They will defend their side to the end of the road( even when its clear they are wrong).  As I've gotten older, I really don't have the time or energy for that shit!  Its fun to read and watch it play out on line, but don't come at me with that bullshit!  It's a sure fire way to get blocked or unfollowed.

So if you liked Phantom Menace, or Fast and the Furious, or Thor 2, or XMen The Last Stand... embrace the shit that you love and stop trying to make me or anyone else love that shit!

Posted by Brothascomics at 11:42 AM