Why is your masculinity so fragile? 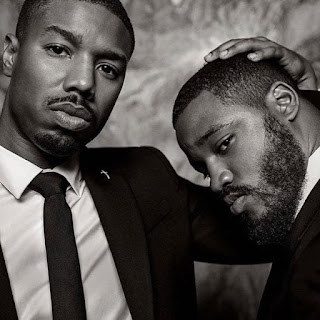 
No matter how hard I try, I always find myself in the comments sections even tho I tell myself not to read it because I know people are going to say the dumbest shit; especially if it relates to race or sexuality.  These topics bring out the worst of the worst in people and makes me lose my faith in humanity after I finish reading.

When I woke up this morning to the article referencing the picture above with Michael B Jordan and the director of Fruitvale Station, Creed( and Black Panther), Ryan Coogler, I could not imagine what "controversy" the picture could be raising.  I had seen the picture Sunday and assumed it was in response to #oscarsSOwhite.  So I read the article and sadly the comments section was brought into the full view and became unavoidable because the comments were the story.  Apparently, many Black viewers of the picture, took offense to it and allowed their fragile version masculinity to be shattered into pieces. This is the second time in the past couple of months where fragile, Black masculinity has been enraged.  The first being the Kanye/Amber Finger in the butt controversy.  And now this. These two incidents speak so much to the fragility of masculinity often seen in the Black community.  Often times Black men showing any sign of love towards another man besides some dap, a back slap,  or a bro hug is looked at as "gay" and this freaks out( some) black men, but also( some) black women. Look at some of the comments. 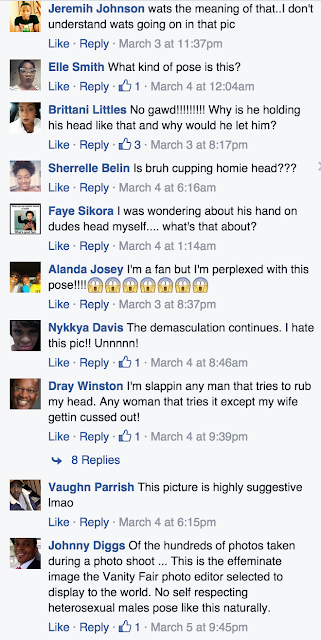 First off, to get it off the table- lets say they were gay!  Why do you fuckin' care?  That is their business, their life, and has nothing to do with you! Why you would be pressed or concerned about their love life is beyond me.  How would them being gay affect your ability to enjoy their art as an actor and director?  So you would enjoy Creed or Fruitvale less if you found out they were lovers? What they put on screen is art! Its  not real and peoples inability to separate the two leads people to say dumb shit!

Secondly, now that is off the table, we can look into the deeper psychological issues associated with Black men and masculinity.   The suggestion that Vanity Fair is looking to effeminate Black men is ludicrous. I mean its really stupid to think this.  Look, its not like Michael B. Jordan and Ryan Coogler just signed up for a photo shoot with no ability to look, check, and approve what pictures make it into Vanity Fair. They pay good money to their publicist and  managers to make sure they are presented in a manner that is satisfactory to them.  And this idea that two Black men hugging is somehow "gay" or a sign of weakness comes from insecurity in ones self. As a much as we preach that all Black people do not think alike, when an image or picture goes against the grain of our version of masculinity, we recoil at the image and expect others to all think the way we do and will buck up to defend their caveman way of thinking.

Lastly, if you see anything sexual in this picture, that says more about you than it does the picture.  If anyone took an undergraduate psychology class, they speak of projecting.... this idea that people will place their own issues and concerns onto other people as a way to not have to deal with the issue. If you see gay sexual issues in this picture, that is on you and speaks loudly as to why this photo bothers you!  You are projecting your own sexuality onto these two men! When I saw that picture, I saw two black men, who have made 2 movies together and who are probably very close, having a moment together. Period.  I am not sure how you can see anything other than that! We all have friends that we allow to do or say things to us that we would not let any rando person do because we are trust that person. That does not make you weak or gay.  That makes us friends!

This really bothered me today.  And as I read through the comments, most people agreed with me.  Its really just those outliers who view anything outside their version of what a "real man" is that pollute the commentary space in times like these.  My mantra everyday is "Have a good day and stay out of the comments sections".  I really wish I had followed my own advice today!

Posted by Brothascomics at 9:37 PM