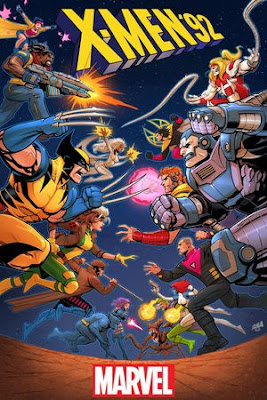 If you have been with @brothascomics for a while, you know we are huge fans of Xmen the animated series from the 90's.  Its one of our favorite shows and we live tweet it from time to time.
So when I was at the comic book store and saw Marvel was producing a book called Xmen 92 I was intrigued but I didn't pick it up! More than anything, I thought it would be hokey and I didn't want it to tread on my love of the animated series.

So when we got to South Carolina Comic Con and I saw the writers of the book were there, I stopped to talk to them and they were real funny dudes.  They are a writing team( Chris Sims and Chad Bowers) and they were so entertaining at their booth, I stopped by again to interview them and of course I bought the book.

The book is great! The artwork is outstanding and the dialogue is true to the characters in the comics, but also with a 90's nod to the tv show.  Now the book is not a rehash of the tv show.  Its more of the backdrop, along with Xmen comics from the 90's. The stories are all new and original!  Definitely check out the book if you get a chance.

As far as the writers go, their chemistry as a team is evident from the start.  Very funny and you can tell they are lifelong friends as well as writing partners.  Check out the interview below you can follow Chris on Twitter at his handle @theisb

Posted by Brothascomics at 3:22 PM