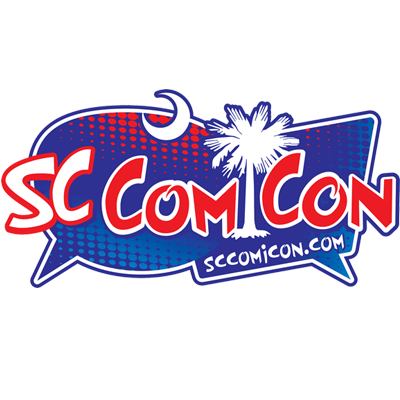 @brothascomics is just unpacking and debriefing after the South Carolina Comic Con.  We just wanted to give a review of the con and our experience. First off we want to say thank you to the organizers who were kind enough enough to leave us press passes for the event.  This allowed us access to creators for interviews and content for our website.

The Location
South Carolina Comic Con is located in beautiful Greenville, South Carolina- which was about a two hours drive from Atlanta for us.  The con was located in a large enough facility at the TD Convention Center.  There was plenty of parking which was cheaper than most cons ( $5) and access to the main hall from different locations helped with lines and crowds. The con was also reasonably priced at only $15 for a Saturday Pass or $20 for the weekend.  Great prices for the quality of the convention.

The Badge Process
This is one of the most frustrating part of any comic con- Badge distribution.  Now, we did not do enough research heading to SCCC. This is a fairly large comic con- they probably did close to 15,000 people this weekend.  So when we got there, the line was long for entrance about 15 minutes before the doors opened.  Now we had passes at Will Call and that line was pretty long, too.  But the biggest difference I saw was that there were workers/volunteers making sure people were in the correct lines and helping them get to the proper lines if they were misplaced.  Also, the volunteers kept the people in line up to date on the process and about how long it was going to take.  That was huge for me as I was travelling with my 10 and 9 year old.  Once we got our badges, it was a smooth entrance into the main hall so I give the badge process major props and kudos. 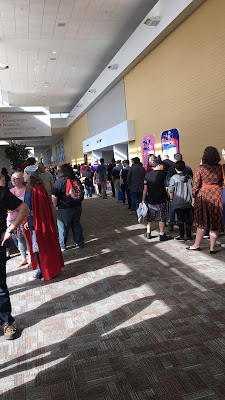 The Main Hall
The Main Hall was spacious enough for people to move through without much hassle.  The layout was logical and there was space enough for you to find a wall to lay up against to take a break or pack away all the stuff your bought.  The was a wide variety of vendors with many nerdly goodies from comics, the toys, Gundam, anime, etc.  Whatever you wanted to find, you could find it in the Main Hall. 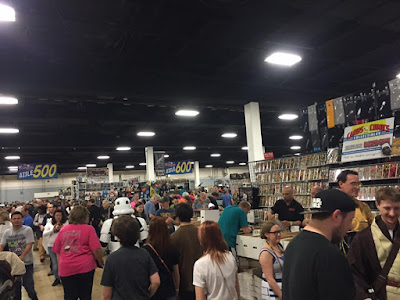 The Guests and Creators
There were some major MVP's at this Con- Neal Adams, Greg Capulo, and George Perez are literal comic book gods and the lines to get to them were as long as you would think.  I was there with my kids so doing an hour line was not going to happen for me, but I was able to meet all three and get pictures with them.  Plus my press pass allowed for me to get an interview with Neal Adams which was a real boss. Plus, there was a diverse list of creators on the floor.  Often, Cons can be absent of women and people of color in Creators Alley and that was far from the case at SCCC!  That diveristy played out in the attendance as well as you saw many POC and their families attending the con. 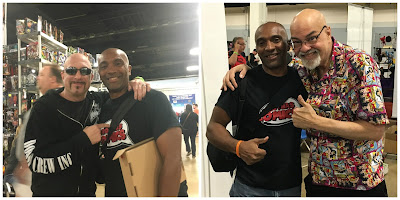 The Cosplay
Now Sunday they had a Cosplay contest, but on Saturday you got a few players and it was pretty good. Deadpool has really taken over the world of Cosplay, but there were a few very good cosplayers all around.

Overall
This is a great medium/large sized con for families.  If you have ever been to Dragon Con here in Atlanta, its a huge con!  At points its so overwhelming with people and traffic, it can become less fun- especially if you have younger kids.  SCCC was a good sized con with all the perks of a larger con without all the craziness and its very family friendly.  I was very impressed and will be recommending SCCC to all my friends that live in the southeast and I will definitely be back next year!  Be sure to check back during the week as we will update with interviews and pictures from SCCC!

Posted by Brothascomics at 3:46 PM