Is it worth a Redbox: Central Intelligence 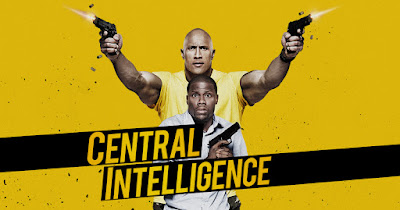 If you are a listener to our podcast of follow us on any social media( and if you are not, why aren't you?), you know that I am a huge fan of the Rock- as a wrestler, not so much as a movie star.  I am not a fan of Kevin Hart at all and truly do not get the phenomena on how or why he is so popular.  So putting these two in a movie together was already a long shot for me to see it and now that I have, I know exactly why it took me so long to watch this movie.

Kevin Hart stars as the "Golden Jet" a kid in high school who essentially had it all- good looks, athletics, and the best looking girl in school.  He truly was worshipped by the school body- including by a fat kid, played by the Rock and massive CGI.  An embarrassing event at a high school pep rally allows them to cross paths for the 1st time and one act of kindness by the "Golden Jet" lasts for over 20 years as their high school reunion approaches.

Because now, Kevin Hart is not beloved by all.  He is an accountant, working at a job that he could give a shit about( I can relate).  His wife is the "star" now and is a partner in her law firm.  While Kevin Hart wrestlers with what happened to his life, a Facebook friend request allows him to reconnect with the fat kid he protected at the pep rally.  Enter the Rock- no longer fat but also a secret CIA agent who is on the run from agents who think he has gone rogue selling secrets of some sort.

The plot is as small as Kevin Hart and the Rock plays his characters as some version of an idiot savant who has muscles and a weird obsession with Kevin Hart's character.  The jokes are bland and often times obvious and the action is pretty much 80's action mixed in with jokes aimed at teenagers- even tho the movie is Rated R

If you like the Rock , the actor, and you like Kevin Hart, you will like this movie.  It gives each a chance to shine and do the things they are both good at. Each of these guys are great at making successful movies that make a shit ton of money.  But that doesn't mean that the movies are any good. So is it worth a Redbox... to me the answer is NO.   Save your $1.50 and pick up something else.

Posted by Brothascomics at 5:42 PM