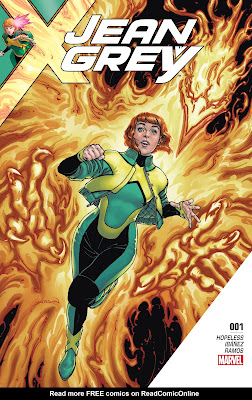 As part of the X-Men relaunch( Resurrxion), new books have been coming out over the past few weeks after the kick off with X-Men Blue and X-Men Gold.  One of the books is Jean Grey getting her first solo title.  Now, if you have been away from the X-Books for a while, you might be thinking, " I thought Jean Grey was dead".  And you would not be totally wrong about that.

A few years ago, the X-Books time shifted the Original( to be referred to as OG moving forward) X-Men team( minus Professor X) to the current continuity,  The reasoning behind this is pure "Because Comics" stuff and I wont bore you with the details.  The OG X-Men are the team that comprises X-Men Blue and the leader of that team is Jean Grey.

Now this Jean Grey is still a level 5 mutant with telekinesis and telepathy powers, but she is unburdened with the guilt of the Phoenix and she would obviously like to keep it that way.

The Book is written by Dennis Hopeless( more on that later) and drawn by Victor Ibanez.  Overall the first issue is ok, but as you can tell from the cover, the X-Books cannot help themselves when dealing with Jean Grey and the Phoenix. A good portion of Issue 1 covers the history of "that" Jean Grey and her inevitable turn from force of good to Dark Phoenix to her death and multiple Resurrxion. 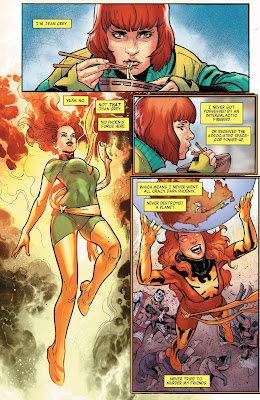 The B plot of the book is "this" Jean Grey is that she is in Kyoto with her sidekick(?) Pickles, a teleporting Bamf. Why is not altogether clear... While in Kyoto for brunch, a certain awful team of Marvel villains is there committing a bank robbery.  When Marvel needs a team of bad guys to look good and threatening but still take a fat L, they call the Wrecking Crew.  And true to form, the look good getting beat up by a teenager. This is not taking away from Jean Grey.  Jean Grey should be able to beat down the Wrecking Crew and a host of other villains because of her power set.  Its just... its the Wrecking Crew, man.  They ain't beat nobody up since the Reagan administration. 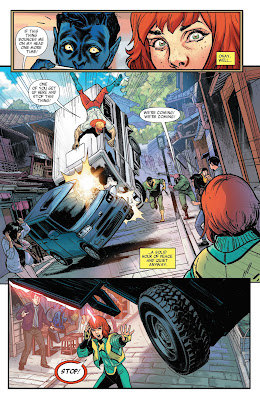 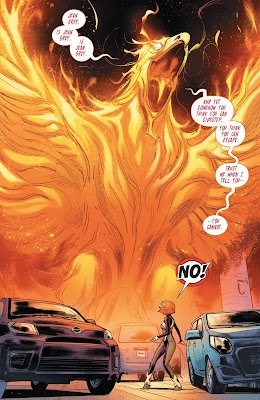 If you have listened to any of our Thursday Night Comic Book Chats( links below), you know that we loved the Phoenix Saga, but have been super hesitant to embrace other resurrections of the Phoenix.  The character has proven to be either too powerful or to evil and this always ends in jean dying or some characters being corrupted in a way.  Jean Grey issue 1 and issue 2 move straight to Phoenix and Jean conflict right away and issue 2 even brings in other characters( Rachel, Hope, Colossus, etc) to interact with Jean about their experience with the Phoenix.  Phoenix has become the boogie man of the X-Men.

And I guess that is fine. I am sure they think or believe that Phoenix sells books. But with this new teenage Jean, who is free of that burden, why not explore her life outside of Phoenix. Her position as leader of the X-Men, her life as a teenage girl with Omega Level Powers, her relationships outside of the team, etc.  These are all emotionally rich topics to explore outside of her being Phoenix and beating up the Wrecking Crew!

Overall, the book is fine enough for a debut.  I truly have no idea why a man is writing this book tho. Teenage girl with powers to me does not scream, "Lets get a dude to write it".  But, as always, white editors and decision makers at Marvel have the amazing mutant power of defaulting to white dudeness.  When given the chance to put a female character in the competent hands of a female writer, Marvel balked and went with Hopeless which may be the most Freudian description of Marvel diversity ever.