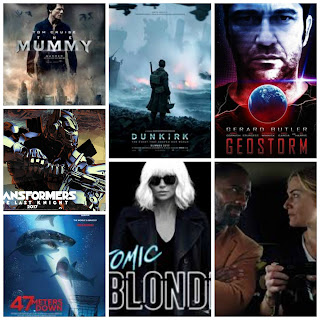 Whenever I go to the movies, I am always interested in what movies are coming out.  We now see trailers on our phone or tablets, but there is nothing like getting hyped for a movie coming soon and seeing it on the big screen.

I saw Wonder Woman on Saturday at a Regal Cinema in my hometown and more than anything, I was surprised at the tone of the trailers before a superhero movie.  I am sitting there with my 12 year old son and 10 year old daughter thinking we would get Spider-Man: Homecoming Trailer, Justice League, and maybe Thor.  Those movies fit the tone of the feature and Justice League is being made by the same studio.  I was wrong!  So wrong.  What they proceed to give us was a bunch of horror/action/drama trailers that kinda put me in the wrong head space before Wonder Woman.  Here they are in no particular order:

The Tom Cruise remake and the hopes of Universal to start their "Monster Movie" series looks like Mission Impossible meets the Mummy.  The fact that somehow, someway, Tom Cruise gets superpowers in this to fight the Mummy is just dumb.  The actresss playing The Mummy is beautiful, tho.  For me, I aint fucked with Tom Cruise since long before he committed career suicide by jumping on Oprah's couch so there is no way I am seeing this crap!

Marky Mark is back and this time, the franchise looks like it brought along Power Pack( google it) to fight against whatever global threats the robots in disguise have brought. Insight into the Producer, I was a huge Transformers fan as a kid and if you ever meet me in person, ask me about the time I got trampled at a store at Christmas trying to buy Transformers( cool storym, bro).  I saw the first Transformers movie with kid like excitement and it was just, meh to me.  I saw the 2nd one, and was like this shit is straight up racist and I have not been back since.  You can lose me for this franchise forver and pretty much anything by the director who shall not be named.  Hardest pass

If you have followed me on this blog and/or podcast, you will know two things I am tired of seeing in movies: 1 is slave narratives and the other is WW2, greatest generation movies. I am over it.  These movies eventually settle on a philosophy that anything great in this country was done by white men and, I'm sorry, but fuck you! I do not worship at the feet on Nolan, either so this movie has two big strikes against it for me. Pass!

I had been seeing promoted stuff on Twitter about this movie and really had no idea what it was about other than it starred Charlize Theron.  The movie actually looks kinda interesting.  It definitely fit the theme heading into Wonder Woman. Of course it gave off a Salt like vibe- a movie that is not very good by the way.  But I am all for women kicking ass and I am a Charlize stan! I would actually pay money to watch this!

When the trailer ran a caption that said from the producer of Independence Day, I was already done with this shit!  They just made a version of this movie with the Day After Tomorrow.  Hell, Cloudy with a Chance of Meatballs just did this, essentially. Look, summer movies are not winning Oscars, but we have seen the world get destroyed by weather before only to be miraculously saved by a white man who was responsible for it anyway.... so many NO'S!!!!!


The Mountain Between Us

The lady I was with to see Wonder Woman is going to make me see this movie.  The joke is on her, tho because I wanted to see the movie anyway. Idris and Cate... shit, Ima see it opening night.  From the trailer, tho, it looks like they not gonna hook up which is the only drawback I am concerned with. All kinds of Thumbs up!

47 Meters Down
Last summer, they gave us a movie about a lady ( white) terrorized by sharks, and 2017 was like, " Hold my Beer!".  This time, two white ladies are someplace they shouldn't be, and wound up stuck in the ocean where they are being terrorized by sharks.  Cool story about the Producer: Part 2: I don't fuck with sharks. I have only seen bits and pieces of Jaws and was totally convinced sharks was in my bathtub after my mom ran the water.  This is a pass for me- even tho I love Many Moore!

So seven trailers, and maybe I would see two of the movies.  I kinda wish Hollywood would come up with new and original ideas, but clearly they don't think we, the movie going public, would support new and fresh content so they just keep rehashing or remaking movies from the past. It is what it is! See you next summer for the remake of Twister!

Posted by Brothascomics at 10:15 AM