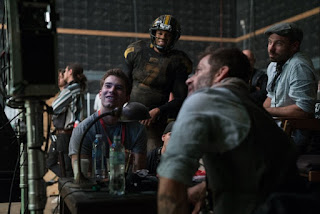 There has been alot said about the Justice League movie and my review will be up at some point... I guess.  There has been all kinds of hand wringing as to why the movie didn't perform at the box office... too much Snyder? Too less Snyder? Wheedon messing things up? CGI missing beards?

Well, we aren't the only ones who had something to say about Justice League.  Zack Snyder's own son weighed in as well.  See below the now deleted message

Full article can be read here from Superbromovies.com 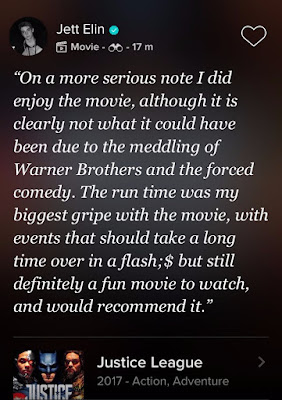 First off, let me say that Warner Brothers has a very recent history of meddling into their super hero pictures.  We have all heard the tales of Suicide Squad and their tinkering with the movie to the point where it was almost unrecognizable.  And after the under performance of Batman V Superman, you can imagine WB executives were on edge to make sure they got a movie they hoped to exploit for at least a billion dollars. So I am sure, those executives had tons to say about the direction and tone of the movie.

All that said, Zack Snyder is a grown ass man and doesn't need his son out here fighting his battles for him.  Zack Snyder has enough clout in Hollywood to be able to tell WB where to stick this movie and their franchise if they were messing too much with his vision.   Granted, because of the tragic suicide of his child, he may not have been in that spot while the film was being made/finished, but he still needed to have some version of control of the editing process of a film he spent close to two years making. And if that version of the film was not up to his standard, he should've  respectfully bowed out.

His son coming out and saying this is just a deflection from the movies performance at the box office. The same with the fans who started the on-line petition to see the Zack Snyder cut of the movie( just stop).  If the movie had done well, none of these excuses would be popping up. And all of this really just leads to a fact that I been saying since we started brothascomics 2 years ago.... DC makes polarizing movies and sadly, they picked a director to lead their universe who also makes polarizing movies.  It has not worked and will not work until Zack Snyder is removed from any and all film making decisions.  He does not understand the characters he has been put in charge of- which leads to these weird version of characters who look like what we want but act and behave nothing like what we want.

I hope DC doesn't crater from this; although I have my doubts.  Going full steam ahead with an Aquaman movie, along with Cyborg and Flash make me nervous as hell.  Regardless, if those movies fail, I certainly hope we are not reading on-line posts from their kids how the movies didn't do well because "meddling"

Posted by Brothascomics at 1:34 PM