Kitty and Peter Make it Official 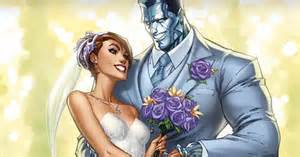 Marvel announced this past week that long time off and on couple, Kitty Pryde and Peter Rasputin- better known as Ariel/Sprite/Shadowcat and Colossus are going to get engaged in X-Men Gold #20.


This relationship has been going on since the 1980's and each person has never really been able to get over the other.  Kitty Pryde even married StarLord and joined the Guardians of the Galaxy yet somehow found her way back to Peter


Look, if you have read or listened to anything we have done at Brothascomics in our almost 3 years of existence, you know that none of the founders of brothascomics is a fan of Kitty Pryde.  The character started off annoying and for some reason, the powers that be at Marvel keep pushing her to be something she is not.  From precocious teen, to Ninja, to all the name changes, to pet Dragons, to adult Kitty, to now leader of the X-Men, and now to once divorced woman, the character has never been interesting enough to carry my interest. 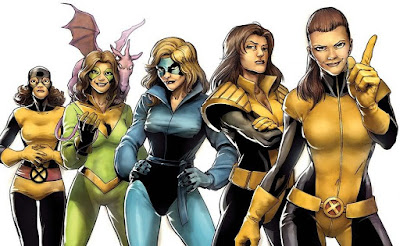 On top of that, there is even talk that Kitty Pryde may even get a solo movie by the people at Fox before the Disney overlords take over in 18 months.  Yep... you ready right... Kitty Pryde getting a solo movie before numerous other X-Men characters... most notably Storm.  It’s a joke, but it’s not funny at all.  I just don't understand it and maybe I am not meant to.  Maybe somewhere, deep in the tunnels of nerdom, there are people that are excited about this.  Maybe there are fans jumping up and down to see Kitty and Peter get married.  Or maybe, this is a big ass publicity stunt to sell some books.  And maybe her getting a movie treatment is further proof that Fox has no idea how powerful and popular Storm is......

So masoltov(sp) Kitty and Peter... Let me know what you want off your gift registry.  Hopefully that girl from the Secret World Planet don't come back to stop the wedding....

Posted by Brothascomics at 10:29 AM