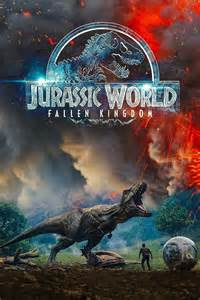 I was able to get an early press screening for the new Jurassic World movie and I wanted to drop a review.  This is the sequel to the highly successful relaunch of the Jurassic Park franchise in 2015 starring Chris Pratt. That movie reinvigorated the tired Jurassic movie franchise making over a billion dollars worldwide and spawning the inevitable sequel.

Like most movie franchises, the sequel usually promises you bigger, stronger, faster, and Fallen Kingdom does much of that.  The plot/premise of the movie is that the island that hosted the dinosaurs in the 2015 movie has been abandoned after the animals went wild and started killing everyone.  But now the island is actually being destroyed volcanoes and an ethical dilemma has occurred: Do we save the dinosaurs?

Now to me, that answer woulda been simple: Let them burn and we roll credits on this movie about 3 minutes in.  Alas, that is not the movie being made here as Claire(played by Bryce Dallas Howard) works for a philanthropist who would love to save the dinosaurs; especially Blue, the ultra smart Raptor trained by Owen( played by Pratt)

Of course these two characters had a romance in the original movie and the chance of getting Blue back pulls our romantic leads back to Dinosaur Island.  Once on the island, we get to see the majestic dinosaurs and, like all Jurassic Park movies, there is a double cross and a plot underfoot to steal the dinosaurs and use them for nefarious purposes.  There is a B plot related to a little girl and cloning that really adds nothing to the story.  People came to see the dinosaurs, man!

Overall, a fairly solid sequel; although each movie becomes more and more ridiculous of getting the humans and the dinosaurs to interact.  This movies ending pushes that into an entirely ludicrous position for the, I am sure 3rd movie: Jurassic World 3: Dinosaurs Gone Wild.

Posted by Brothascomics at 10:51 PM