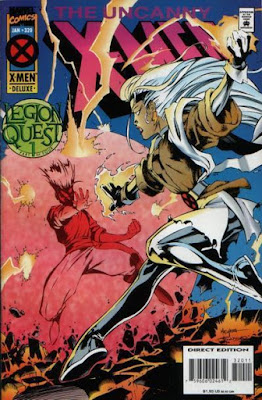 With the news that Fox and Marvel struck a deal for Fox to produce Mutant themed shows on their network of Fox channels- one show of which is Legion on FX.  To those unfamiliar, Legion is the son of Charles Xavier and Gabrielle Haller. Xavier and Haller met during a time of war at a hospital.  Xavier was using his powers to heal mental patients at the hospital Haller also worked.  Haller hid the pregnancy from Xavier and he never knew he had a son until his mutant powers activated.  A son whose mutant powers have always been fractured because of schizophrenia and how powerful he is could never be determined because each of his personalities had a different power.

Back in 1994, Marvel was prepping for the Age of Apocalypse( also called World without Xavier)- an alternate reality where Xavier died and his dream of peaceful co-existence between mutants and humans died with him and this new world would be taken over by Apocalypse.

Before Legion Quest
This is at a time when Xmen was by the far the most popular book in comics.  So popular in fact that the team was split in two( Gold and Blue Teams) and they were given 2 different books( a practice unheard of for non Spider-Man books at the time).

This is also after a time where the Xmen and Magneto had fought their fiercest battle.  The attack on Avalon after Magneto had effectively crippled the Earth leaves Wolverine without his adamantium after Magneto ripped it out and this pushed Xavier to the brink and he wiped Magneto's mind clean and left him a vegtable now being cared for The Acolytes( and Colossus). 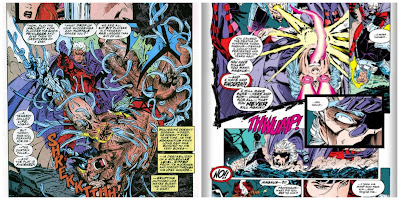 Legion has had an interesting run in the X-Universe.  He has been part of the New Mutants and X Factor books for some time- really trying to make him a hero of some sort.  But his introduction and how is powers were handled and his life on Muir Island always made him an outcast character.  At the time from awakening from his coma, he had previously been under the control of the Shadow King who had used Legion's powers to increased the worlds hatred and had been feeding off that hatred to become more powerful( such a 90's comic storyline)  During this time, Legion killed the pre-cog Destiny of the Brotherhood of Evil Mutants.  This pissed off Mystique as she counted Destiny as her one and only friend on Earth.  When Mystique went to get revenge on Legion, she found Legion's mind and powers fully intact after his possession by the Shadow King and he is a super powerful, Level 5 mutant with telekinetic abilities and other untapped powers. 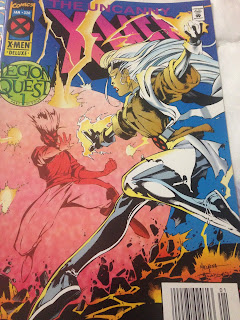 The issue begins as a short flashfoward where we already see Storm engaged in battle with Legion and she is almost a full power attempting to just get Legion's attention to no avail.  The rest of the Gold Team- led by Storm consists of Jean Grey/Phoenix, Ice Man, Psylocke, and Bishop.  Colossus was a part of Gold team, but he is taking care of Magneto on Asteroid M. Archangel, who at the time is dating Psylocke, is on a mission with the Blue Team.  Gold team is doing their best to hold on as Storm is going full blast at Legion. 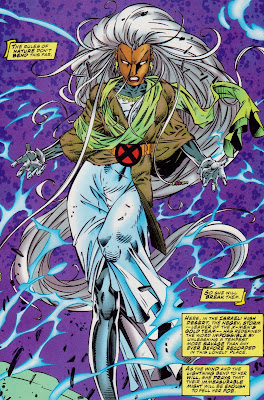 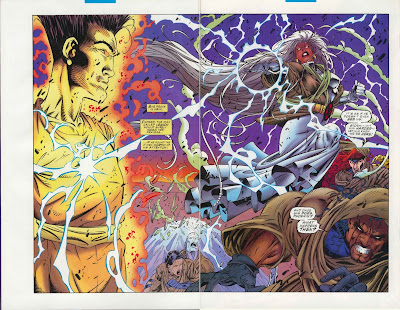 The book then flashes back to the Xmen arriving in Israel to help deal with this situation.  Legion has constructed and impenetrable fortress in his homeland and military attempts to enter the fortress have been useless.  Gabrielle Haller, his mom, is now an ambassador to Israel.  Haller informs the Xmen of what is going on and now her sons mind is fully intact and his power is unlimited and he may even be as powerful as his father, Professor Xavier. Ambassador Haller says that her sons power is God like and she called in the Xmen for help.  Storm, recognizing the gravity of the situation gathers the rest of the team for an assault on Legion- which we saw on the opening flash page of the book. 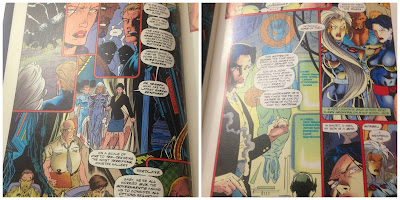 Back inside the bubble, Storm is in the fight of her life with Legion.  He begins to show her the extent of his new found powers and actually transports Storm back in time to her childhood.  Storm had a tragedy that left her an orphan where her parents were killed in a car accident.  Legion time jump them back to that moment and gives Storm the chance to make it right.  He makes Storm relive the moment and the pain and helplessness of not being able to change history; all the while letting Storm know his new powers are going to allow Legion to change history. 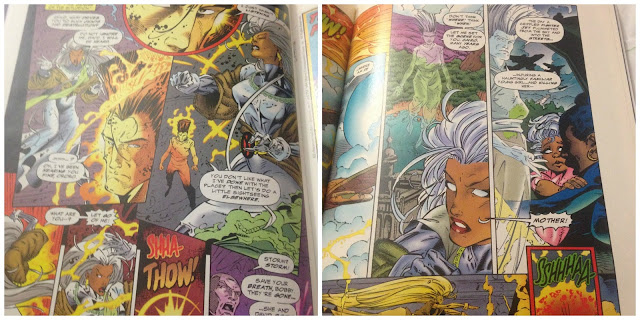 In a moment of distraction, Bishop is able to get Legion's attention and siphon off some of his power. It is short lived and Legion soon alludes of his plan to Jean Grey/Phoenix.  He is finally going to make his fathers dream of mutant-human conexistance come true by eliminating the one man who has stood in the way of that dream.  In an effort to link their minds together during the battle, Psylocke locks minds with Bishop, Storm, and Iceman when Legion makes his leap back in time and the temporal energy all disappear from the bubble while Jean is left wondering what has happened.

Legion Quest Part 1 ends with Jean Grey/Phoenix stranded in the desert in Israel placing a psychic call out to Professor Xavier letting him know what happened and what they are up against in Legion. 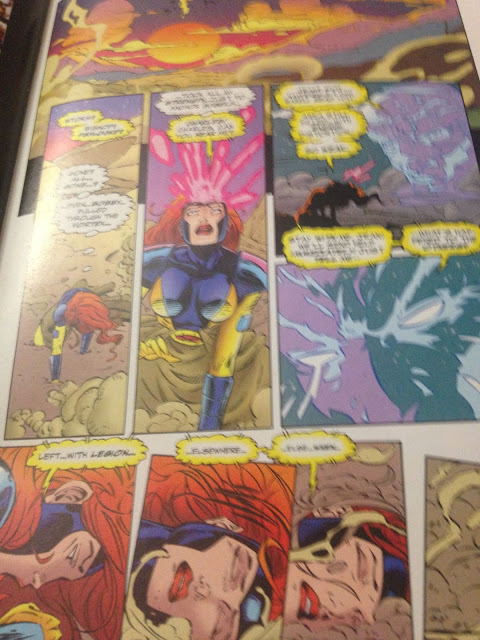 This is our road to the Age of Apocalypse.  Join us later this week for Legion Quest Issue 2 as the Xmen have to deal with Legion in the past and the Shi'ar in the present and what that means for the future.

Posted by Brothascomics at 1:08 PM