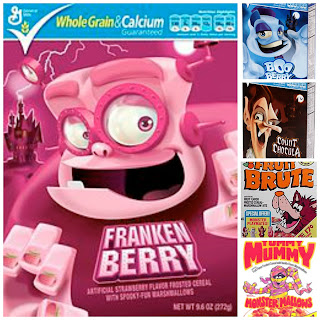 Big Hutch, on the podcast this week, was lamenting the fact that he could not find Count Chocula in the grocery store and wanted to give an STFU to Publix for not carrying it.  We all got a big laugh out of this and it led me to confess my story about my love for FrankenBerry.  Since they stopped selling Frankenberry in Ohio while I was in middle school/high school, I had not had it for such a long time.  Then I went on a trip to South Carolina with the tennis team in college, the Piggly Wiggly actually sold Frankenberry and I wound up buying $30 worth of cereal.  Then when I graduated, my good friend lived in South Carolina and wound up sending me boxes of Frankenberry from time to time!  Always been a big fan of Frankenberry.  So if you are not familiar with the Monster Cereals, here is a quick breakdown on each!  Each cereal is essentially the same with sugar based "cereal" with flavored marshmallows.


Count Chocula( based on Count Dracula)
By far the most famous one and the most popular Monster Cereal.  I do not mess with it or any other chocolate based cereals. I do not like my milk turning brown like that.  As the Monster Cereals went away in the 80's, Count Chocula was the one that was still sold in most places.  Count Chocula even has breakfast bars now- which none of the other cereals have.


Frankenberry ( based on Frankenstein)

My favorite and I know its Big Hutch's favorite and now my sons favorite. I have never smoked crack but I would imagine that its something like eating Frankenberry for the first time.
It's "strawberry" flavored(I guess) and will turn your milk kinda pink. Its funny, I never ate a strawberry as a child and now that I do eat them, they don't taste like Frankenberry! There was a rumor our there for the longest that it also may turn your poop pink if you ate too much of it.  Frankenberry is only available during the Halloween season.  After Halloween, its gone and you will have to wait until next September to buy a box.  Since my son likes it, I have bought 3 boxes since it went on sell and there are no boxes left in the house and I have not eaten one bowl.

Boo-Berry ( based on generic Ghost)


My second favorite cereal.  It's "blueberry" flavored and will turn your milk blue. Honestly, i cannot taste the real difference between Boo-Berry and Frankenberry at this point in my life.  I know Big Hutch and I was hyped than a mother.... when Boo Berry came out tho.  Saturday morning cartoons and a new Monster Cereal was fancy living in our house.  Boo-Berry is also only available during Halloween season and even then some stores do not carry it.


Fruit Brute ( based on the Werewolf)
Cereals are often no different than tv shows.  When a show is not doing well, after being popular for a long time, they will often introduce a new character to add some life to the show.  Companies do this all the time and General Mills, the makers of Monster Cereal, must have felt that the brand was getting stale, and introduced Fruit Brute to the Monster Cereal brand.  I vaguely remember having it because it was new but I don't remember anything about it.  The marshmallows were to taste like "fruit". "Um, ok Mr. Cereal Company.  Stop trying to get me to eat healthy shit at breakfast- I'm 12!"
Fruit Brute only lasted a few years( shocking) and was replaced by the final entry ( and is no longer available to buy- not even during Halloween)!


The Yummy Mummy( based on the Mummy)

Yummy Mummy replaced Fruit Brute and General Meals tried to pull one over on kids and just repackaged the same cereal with a different monster.  Its the same cereal really, but it had bigger marshmallows.  GTFO with that stuff General Mills. Kids wants cereal with sugar and alot of it.   Not falling for bait and switch tactic and Yummy Mummy is the last Monster Cereal and is also not available for purchase anymore.

So let us know what was your favorite Monster Cereal.  And if you have a shit ton of time on your hand, this video has ALL the Monster Cereal commercials ever made!

Posted by Brothascomics at 11:40 AM