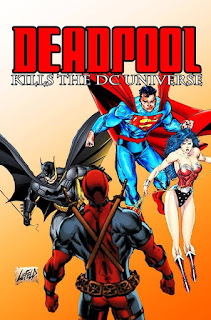 @brothascomics was blown away by the success of Deadpool at the box office.  I am sure Marvel and Fox, in their most truthful moments, never expected the movie to do so well.  And lastly, I am certain executives over at DC had no inkling that Deadpool would become this huge monetary and critical success.

The success of Deadpool now places an enormous amount of pressure on Batman V Superman.  Granted, there was already pressure.  The pressure to make a good movie, coupled with box office expectations, in addition to the movie being the tentpole for DC Cinematic moving forward.  The pressure was already there.  But by Deadpool getting out first AND making such a huge box office splash, it now ramps up the expectations for BvS.  Deadpool is well on its way to making close to $300 million on a budget of about $60 million.  Fox/Marvel took a character, who is not a well know house hold name, and turned him into a superstar.  BvS stars the holy Trinity for DC and has more guest stars than a Pete Rock CD.  The alleged production budget on the movie is well over $200 million- making it the most exspensive comic book movie ever made.  DC needs the movie to be profitable for many reasons but it also cannot make less domestic than Deadpool at the box office.  That would be an epic fail for DC Cinematic and quite embarrassing moving forward with their properties.

There is already news out there that DC is nervous about the movie.  Executive speaking on conditions of anonymity are saying the movie response interanlly "has not been what they wanted" This could mean many things, but if comic book movies have taught us anything, nervous executives will  tinker with movies and take away the vision the writers and directors had for the movie. Movie executives only think about money and have no vision and they will meddle in the filmaking process with only money in mind. We learned this on Age of Ultron and on Fantastic Four. And from the outside looking in, BvS looks to have a lot of chefs in the kitchen which is why the movie looks overfull of characters and action, with a very small hint of the story surrounding it all.

So what happens if BvS shits the bed? And by shit the bed, I mean it does $200-300 million domestic.  Suicide Squad is already in the can and Wonder Woman is in production.  If the movie under performs, will we even see a Justice League movie? Aquaman? Cyborg? Green Lantern Corps? How much does BvS need to make to justify DC Cinematic moving forward?  Its a great question and one DC was thinking they would never have to ask.  Deadpool has changed everything moving forward!

I have been on the record for months that I am scared of this movie. I do not trust DC. I do not trust the director. And I do not trust their vision.  The movie has seemed rushed from the beginning and nothing I have seen from the trailers leads me to think otherwise.  But I have also said that I hope that I am wrong.  I want to be wrong here.  I want DC to make a great BvS movie! As fans, we all win when studios put out great movies.  Plus it will force Marvel to step up their game if they view DC as a legitimate threat to their movie empire.  But I am a firm believer of where there is smoke, there is fire. If these leaks from executives are real, this movie is in trouble and in turn the whole DC Cinematic Universe is in trouble.  And who knew the Merc with a Mouth would be to blame!

Posted by Brothascomics at 3:22 PM