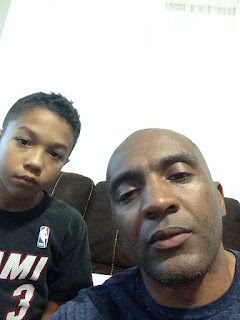 A little insight into The Producer.... My son is ten years old and he is half black and half Puerto Rican so the character of Miles Morales has always spoken to me in a way other characters do not.  My son, looks up to Miles because he sees himself literally in the character so I am very protective of Miles and worry often about his portrayal in comics.  When I heard Miles was going to be "THE" Spider-Man of the Marvel universe I was more excited than my son!  Of course Marvel, being Marvel, did not allow that to actually happen and now I have some concerns again about the character( I will share that at the end). For now, off to the review of Spider-Man #1....


Being Spider-Man ain't easy.. That could be the start of lyrics by Miles Morales with back up vocals by Peter Parker.  In the aftermath of Secret Wars, Miles Morales is now the domestic Spider-Man, while Peter Parker is International Spider-Man.  Miles has to hold it down in NYC, but he is still a teenager, infected with teenage problems and issues like school, girls, and parents who just don't
understand.


Spiderman #1 is written by Brian Bendis, with art work by Sara Pichelli.  The book opens in the aftermath of a huge battle in the city and in the wreckage are the remains of the Avengers who have been layed waste by Blackheart, son of Mephisto.  Now, Spider- Man must face off against the villain who just took out the Avengers. 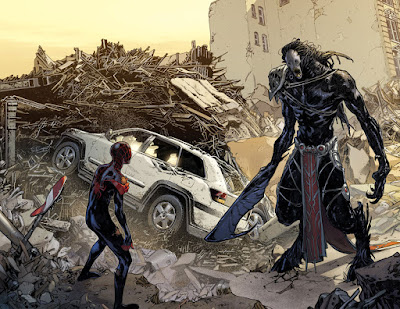 But before we get to that, we flash back to high school where Miles is not having any luck with a lady friend who he had to stand up to fight crime.  He had an excuse about traffic and he thought she would be understanding, but she was not having any of it and puts him on blast in front of other students and more importantly in front of Miles' best friend, Ganke. 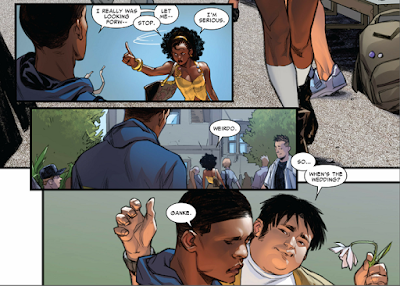 Ganke knows Miles' secret and has suggestions that he should really be dating someone like him....no not half black and half Puerto Rican... No, someone who has powers. Miles is not having any of it and laments the fact that he really just wanted to make out with the girl that just dumped him.  Side note... I really like the writing in this scene and the humanization of Miles.  Often times writers will make teenagers seem more worldly and sophisticated than they actually are.  Most of the times they are just horny little creatures and being Spider-Man ain't gonna change that! 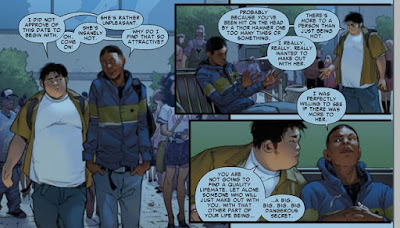 If girls were his only problem, maybe he could deal, but he also has a mom who just got a copy of his grades and she is not happy.  And when mama calls to let him know, he tries to lie and wiggle his way out but mom ain't having it either.  She gets so frustrated she puts him on the phone with his dad who is much calmer about the situation( bc he knows his son is Spider-Man). 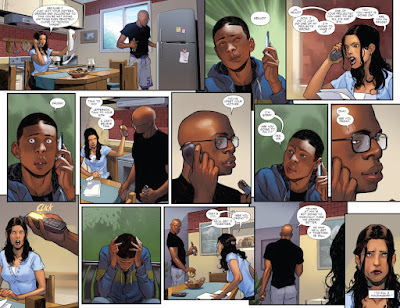 And if that was not bad enough, Miles still has to go to class and get berated by that one teacher who seems to have it in for him.  I think we can all relate to that one teacher who disliked us- no matter what we did.  Well, Miles has not done his work and when his Spider Sense starts tingling, he feels the need to help and even walks out of class- knowing he will have hell to pay later for his insubordination. 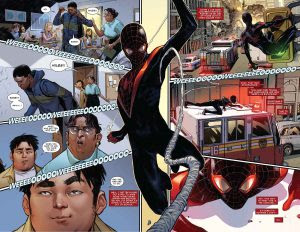 When he gets to the scene of the disturbance, he begins to help the innocent caught in the collateral damage of the battle.  Then, as he gets closer to the epicenter of the event, he sees the Avengers fighting their hardest against Blackheart.  Spider-Man joins the battle to assist but once Captain America goes down, he is on his own against Blackheart! 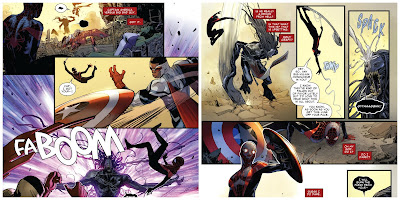 The usual Spidey-banter with villains is there, but Miles is not Peter Parker in that way.  He has way more internal dialogue with himself about the battle than jokes and is looking for a way to defeat Blackheart. He even uses Captain America's shield for a time. When he finally uses a Venom Blast( TM), Blackheart retreats the scene leaving Miles in the aftermath, but also with a disapproving big brother wondering what he did to cause this. 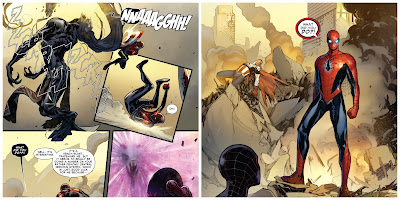 That's the end of issue 1.  I thought it was an okay debut.  The artwork is superb and even tho I don't like the idea of Spider-Man being able to defeat a villain by himself that took out the Avengers, I can look past that part.  My overall concern is with Peter Parker still being around.  Look, I know that Peter Parker as Spider-Man is a staple of comic book history. I get it!  But, to have 2 Spider-Men(?) makes no sense either.  By making Miles Spidey, Jr, you weaken him as a character, no matter how many villains he defeats.  And as long as Peter is around, we are all just waiting for the shoe to drop on Miles. What are you going to kill Miles? Or send him back to the multiverse? I am not understanding what the end game is and just like Steve Rogers coming back to be Captain America, it takes a previously strong character of color( Sam Wilson) and makes them a sidekick either in reality or perception.

So nice debut issue. I am in for the long run, but I do questions moving forward.

Posted by Brothascomics at 1:44 PM