No diversity in the room: Secret Wars 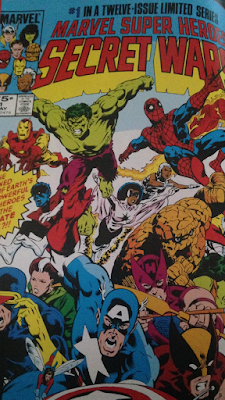 @brothascomics has been walking issue by issue through the original Secret Wars as a throwback to an iconic series from the 80's.  You can find the first two issues reviews here:


On top of that, we have been podcasting our reviews of the issues and having a funny look back at the writing of comics in the 80's and how many of our beloved heroes have evolved since then.  You can find links to the podcasts here:

The podcasts, however, have exposed a wide open secret in the comic industry about the clear lack of diversity in the creative and writing process.  This lack of diversity leads to comics which; although entertaining still 30 some odd years later, also make you cringe when you read the dialogue and the culture behind that dialogue.  When there is a lack of other voices in the room, people will make up what they perceive or believe on how women and people of color speak.  And often its totally wrong, lacks empathy, and it borderline offensive.

Look we are big comic fans here, but we'd be wrong if we don't point out this nonsense and have a little bit of fun doing it.  So lets check out some cringe worthy dialogue with a few of our heroes.

At the time, Tony Stark is not Iron-Man. James Rhodes is in the suit.  Now "Rhodey" is from South Philly, but he is also a military man, whose foundation is based on orders. In Secret Wars, Rhodey's dialogue is very stereotypical and often ends sentences with "man or "my man". Please remember this is 1984.    And he is incredibly sexist- referring to Captain Marvel as "woman" and "babe".   He also refers to her as, "talent" and overall in the series is a sexist jerk to her. You have to think that is how the writers thought black men talked to black women and it would be ok.  Hint:  Its not ok!  Plus, in a stereotypical move, they put Iron Man on roller skates- even tho he has the ability to fly. And he even drops a Rudy from Fat Albert and tells the Human Torch he has "No class, man"! And when it was time to shine and battle the villains, somehow Iron Man was not even ready for battle and was pulling his suit on while everyone else fought on.  Well everyone except... 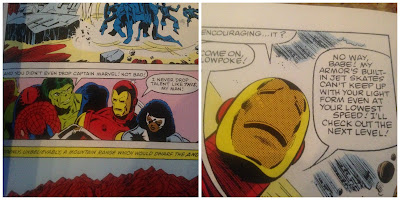 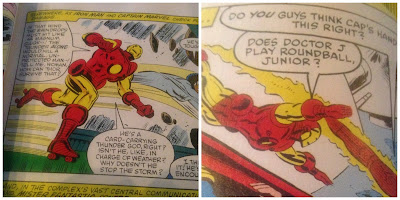 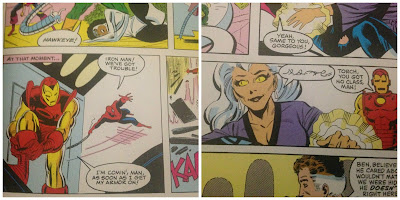 Monica Rambeau's history with Marvel is much better now than it was in 1984. In 1984, she was designed and given the look of Pam Grier by the creators.  Yet in 1984, they have her rocking a natural afro. In 1984.  What is she doing when the big battle of issue 2 breaks out?  Taking a bath! A bath?! Not a shower- a bath.  Werd?   Then she gets taken out by a C level villain in Dr. Octopus after she gets out of the bathtub. The bathtub.  So two of the three black heroes in the entire Secret Wars are: both late to the battle and unprepared to fight because they can't get they shoes on and are just getting out of the tub. 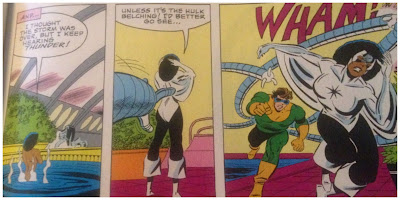 I dislike the character of the Wasp and in Secret Wars she is even more annoying than normal to me. However, early in the series, after she is kidnapped by Magneto for... well its never really explained. But as part of that scene, there is a very uncomfortable scene where Magneto pushes up on her and she says "no, no, no" yet he still assaults her and eventually she gives in.  You have to imagine, no women were in the room when this was written or story boarded.  Having the leader of the Avengers being assaulted and then giving in and later, washing it over like it never happened, is such disrespect for a woman. 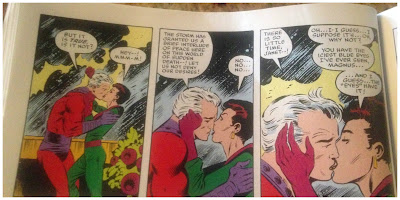 If you have listened to the podcast, we make fun of these situations and have a good laugh based on the audacity of the writers in the room.  Its such a prime example of a series that is iconic for sure, but upon further review did nothing to help advance the cause of heroes of color or females.  Marvel gets props for its diversity and currently being hailed for its hip hop variant covers,  but they still lag far behind on diversity in the writing room and artists. This matters. It does. People of color and women can offer point and counter point on how it feels to be in a given situation to make it seem more real and authentic.  Not some dude pretending to know what a woman would think or feel in that situation.  Its privilege run wild and its not totally harmless because its in a comic book.

So Marvel we gonna call statue of limitations on this one. I think the 32 years since this came out is too long to run you over the coals for it.  But, this same culture still exists in your writing rooms and how you pick artists for your books.  Its been long enough.  You can do better!

Posted by Brothascomics at 10:00 PM