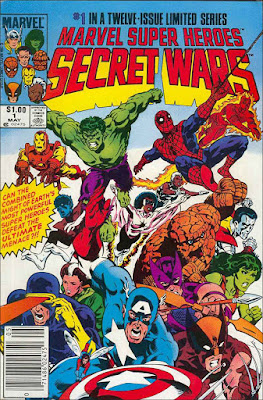 With the conclusion of the Hickman Secret Wars(2015), @brothascomics is gonna take a a look back at the original Secret Wars.  Developed primarily as a tool for Marvel to sell toys, the series winds up having significant impact on the Marvel Universe. It spawns an awful sequel in Secret War 2, but the influence of the original lives on as evident by the homage to the original by Hickman's Secret Wars 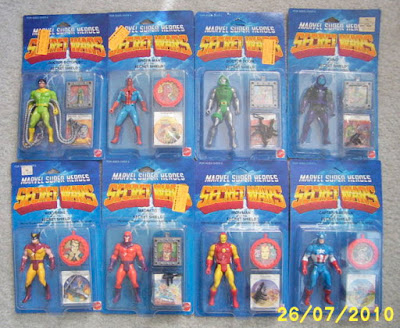 Over the course of the next few weeks, we will review issues 1-12 and host a podcast to discuss the series.  So grab a Jolt Cola and sit back and enjoy the recaps.

Prior to the start of the series, all the heroes are drawn to Central Park because of this large construct that has appeared in the park.  One by one, the heroes enter and are transported into space and wind up all together and confused as to how they wound up in space. 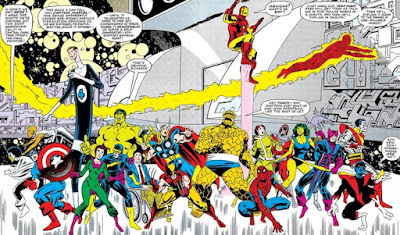 Representing the heroes the Avengers, the Xmen, the Fantastic Four( minus Sue Richards), Spider man, Hulk, and for a reason that will become apparent later, Magneto.  For some reason the heroes feel  the need to introduce themselves and Wasp, who is leader of the Avengers at the time, does so in the most arrogant way possible.  It must be noted that Iron Man is James Rhodes at this time and The Hulk is smart and under the control of Bruce Banner.

At the same time, the villains have been transported as well to a different construct.  Its implied that many of the villains were taken from their homes or prison and transported unlike the heroes who went in voluntarily.  At the same time, the heroes are kinda confused as to why Magneto is with them and not on the other construct.  The Xmen, Xavier in particular, are very protective of Magneto even tho he is not trying to be a hero. While trying to figure all of this out, the power of the Beyonder is revealed.  He begins to destroy one galaxy to make another( Battleworld).  His power on full display shocks and awes everyone. 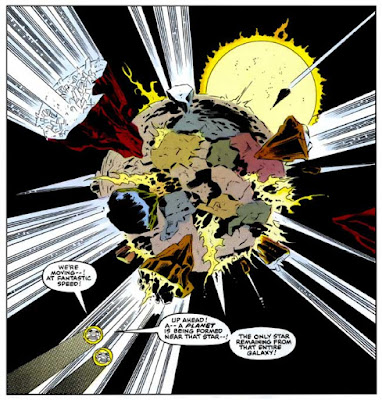 Once Battleworld is formed, finally the Beyonder speaks.  He speaks of this great battle and that if you slay your villains, you will get whatever you choose. 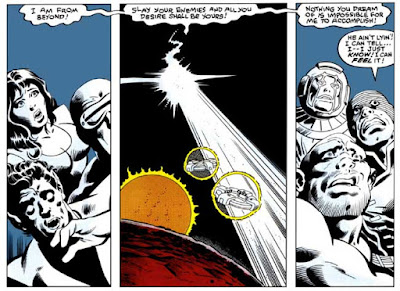 Galactus is the first to act.  Wanting to end his constant huger for planets, he charges out towards the source of the Beyonder's power.  Dr. Doom, who is curious as well as power hungry, follows shortly after as they fly towards the Beyonder. 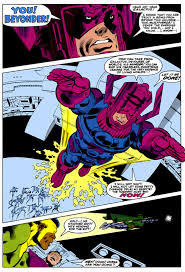 Of course the Beyonder has God like powers and swats the both of them back to Battleworld like its nothing.  For Doom, this is his wake up call.  The power of the Beyonder is so great that even he does not think anyone should challenge him directly. 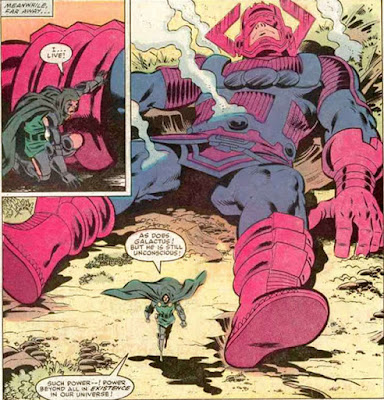 Meanwhile, the heroes are looking to find a leader for this upcoming battle.   But first they need to decide what to do with Magneto.  No one besides the Xmen want him there and its become a tense situations between the heroes.  Eventually, Magneto feels attacked and decides to fight back and deuces the heroes to do his own thing. 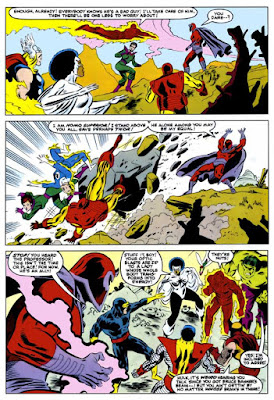 After Magneto leaves, the heroes decide they must have a leader for this upcoming battle.  Many names are tossed around, but eventually they settle on Captain America to lead the team.

As Doom heads back to the villain base after his Beyonder smack down, he is formulating what to do next.  Doom recognizes the power and how very little he could do to challenge the Beyonder on his own. He plans to seek out Reed Richards to formulate some plan to stop the Beyonder.  of course his villain co horts want to challenge the heroes so they can win the prize the Beyonder is offering.  This is insulting to Doom and he attacks the villains and plans to fly to see Reed.  Kang, thinks that is a bitch ass move and shoots down Dooms ship when it leaves the base. 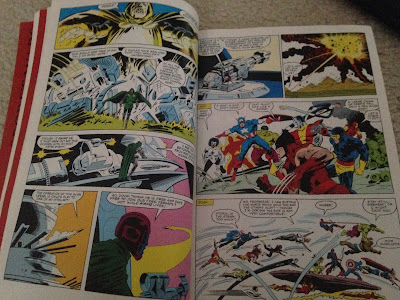 As the heroes move to check out the explosion that took down Doom's ship, the villains move in to attack and we end issue one on a cliffhanger before the first battle between hero and villains. 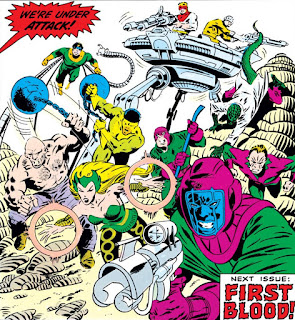 That ends issue #1.  As much as I love this series, its kind of a mess in parts and it definitely shows its age when you re-read it.  Villains and heroes a like are constantly invoking their own name and the idea of thought boxes all over the place is 20 80's and 90's comics.  I think a major point people miss when looking pack is how sorry the villains are, tho.  I mean the Wrecking Crew? Lizard?  Kang and Dr. Doom are solid and powerful enough to take on the heroes by themselves.  And of course Galactus can hold his own against anyone.  Meanwhile the heroes are stacked with all their most powerful heroes AND the Hulk.  Not a fair fight at all.

But solid effort. Looking forward to issue #2.
The Producer

Posted by Brothascomics at 2:30 PM