Gambit: What could I have done? 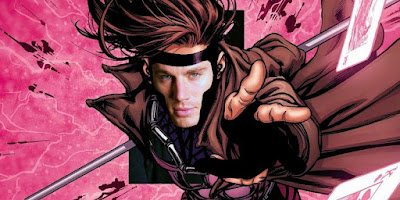 "What more could I have done?"
"There were warning signs, I should have paid more attention!"
"Looking back, you could see there were problems."

These are not quotes from the latest mass shooting in the United States.  These are the quotes fan boys and girls will be making after the Gambit movie makes its way into theaters in 2017 or later....

The news dropped today that production on the Doug Liman directed and Channing Tatum starring, Gambit will begin production in New Orleans in March, 2016.  This is after many pre production delays including contract renegotiation's with the star, the original director dropping out, and script after script revision.  Finally, production will begin this spring with a TBD actual release date of the movie.

I fear we will all be making these statements after the movie is released- hell probably before once set leaks come out and we see "Bucket Head" Channing Tatum dressed as our favorite Cajun.  I have been hard pressed to find one person who has been on board with his casting( He's too big". He's too dumb!" He can't act. He can't get the accent right").  So I wonder why Fox is so full steam ahead of making this movie?  Gambit is top five in terms of most popular Xmen, right?  So him HAVING a movie is not that big of a surprise.  The surprise is why Fox is not allowing or the character to grow BEFORE giving him a headline movie.  Why not place the character in an X-Men movie first and then spin him off from there( like Marvel is doing with Black Panther).  This way, the character has some backstory and audiences are more familiar with the character.  This way you don't have to spend 45 minutes of the Gambit movie telling an origin story that no one wants to see.

And on top of that.... If Gambit is top 5 in terms of popularity and you believe so much in the character and his importance in the X-Univrse, you telling me you couldn't find someone better than Channing Tatum to play the lead?  C'mon man?!  I am not sure if he is too big for the role but I know dude cannot act and there will be a level of smooth that the character needs to pull off and Channing Tatum cannot do that.  Maybe I'm wrong but I doubt it!

So now we are left with a movie with every possible pre- production concern moving forward.  Could we have done more as fans? Should there have been on line petitions?  Sit ins? Boycotts? Rain dances? Voodoo dolls? Something/anything to stop this travesty from happening?  What more could I have done? Sadly, I think its probably too late!