Is it worth a Redbox: The Perfect Guy 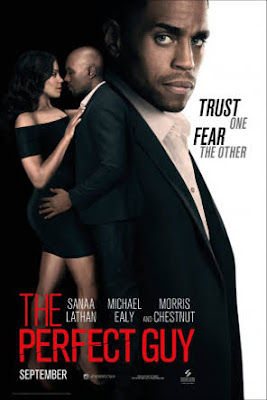 In our continuing series of watching Redbox movies for you and helping you decide "Is it worth a Redbox" we give you this weeks entry: The Perfect Guy.

The movie Stars Sanaa Lathan, Morris Chestnut, and Michael Ealy.  I actually wanted to like this movie.  I am a sucker for Fatal Attraction like movies and I watch more Lifetime movies than most straight men probably should.  The last Fatal Attraction movie with a predominantly Black cast was, Obsessed starring Beyonce and Idris Alba.  Now that movie is Gawd awful.  Bad acting, writing, directing- there is nothing redeeming about that movie.

The Perfect Guy in comparison to Obsessed is great- but that does not make it a great movie.  Sanaa Lathan stars as a career business woman who is engaged to Morris Chestnut, but for some reason, shit dont work out.  They break up and in the phase of "getting out there" she meets Michael Ealy's , character, Carter. They hit it off and the usual dating and mating rituals go according to form.  But suddenly, an incident happens at a gas station where Carter beats the brakes off some dude in a jealous rage and this scares Sanaa and she breaks it off with him.  He does not take no for an answer easily and stalks her and intimidates her until she gets the police involved.  There is the standard Fatal Attraction rip off with a cat instead of a bunny, the killing of a close friend,  but the movie fails to "go there" and actually make this movie intense enough to actually make you believe it.  These Fatal Attraction rip offs have to straddle a line between camp and intense drama and this one leans more towards drama but its not intense.  Not even a little bit. The acting performances aren't bad, but I think in the effort to keep the movie PG, much of the intensity and drama got left on the cutting room floor and the movie becomes tepid.

Of course, she winds up back with Morris Chestnut which sends Carter even more over the edge and not to spoil anything, there is a confrontation between the two.  The movie ends on some Girl Power stuff where Sanaa has to take the law into her own hands to save her own life. Bada Bing, Bada Boom. Movie over!

Kinda long and kinda boring.  This movie does nothing well or poorly.  Its just another movie.  Is it worth a Redbox? I would say NO, but if you are struggling to rent something and its there, you could rent alot worse movies.

Posted by Brothascomics at 3:32 PM