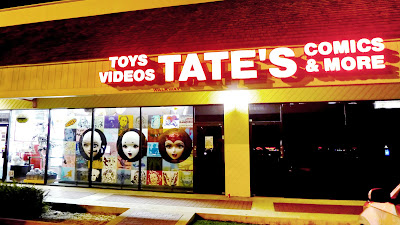 A new feature we are adding to Brothascomics- Comic Shop Profile.  The first comic shop we are going to profile is Tate's Comics in Lauderhill, Florida.  I picked Tate's to profile first because it was my shop for over 13 years when I lived in South Florida and it is literally one of the best shops in the country.

Just some background... when I moved to Florida and got my first adult paying job, I was looking for a store to get books.  I went to a few that were more local to my house for a while but they wound up going out of business.  Then one day, i was just driving down University Drive and saw their sign and pulled in and I never went to another store.

The owner is Tate Otati and his back story on how he came to own the store and the history of the store can be found on their website.   Tate's dad, Tony, who also works at the store, was a school teacher( like me at the time) so we bonded over comics and the state of education in Florida.  The place just felt like home.  Wednesday's at Tate's became like a religion for me and I always felt welcomed- even as a blerd.

The store is a treasure trove for all your nerdly needs.  Of course there are comics, but the collectibles and statues are top notch. There are movie props galore and all of it is for sell if you got deep pockets.  The staff is wonderfully adorkable and can answer any geekly questions that you throw at them.  This does not even speak to the Japanese snack tastings, the Not at Comic Con Comic Con event and the huge party they throw on Free Comic Book Day.  Hell, there have been date nights and movie meet ups for the latest and greatest nerd features.  Plus, Big Hutch would kill me if if I didn't plug their Gaming Satellite for all your RPG needs.

Since I have moved, I've been back to visit a few times and people still remember me and always treat me as kindly as the first day I walked in.  Great store, great staff.... If you ever get a chance to visit South Florida and you are a nerd/geek/blerd, you need to check out Tate's Comics!


Check out our video profile of the store and look for the camera shy owner Tate Otati!  Thanks for Joanne for the interview and the staff for being so kind to me while we shot inside the store.


Posted by Brothascomics at 2:10 PM