Who Should play Cable

Who Should Play Cable 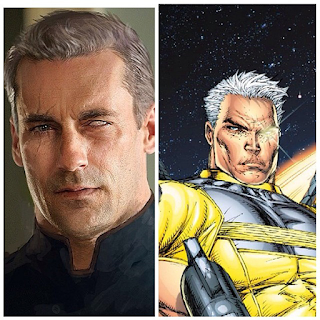 Our friends over at Cinema Blend got a chance to talk to the creator of Deadpool, Rob Liefeld and he made a suggestion on who should play Cable in the Deadpool sequel..... Jon Hamn.  Mr. Mad Men himself as Nathan Dayspring?  As much as I hate Rob Liefeld, that is a perfectly good suggestion.

For those who are unfamiliar, Cable is the child of Cyclops and his cloned wife Madelyn Pryor.  He is a class 5 level mutant with telepathy and telekinesis and even though he was born in "our" timeline, he was sent to the future because he was infected with a techno virus and had to be sent away for a cure.  Cable grows up in an era where Apoclype rules the world and he spends most of his time time traveling back and forth to prevent his future from happening.  That is like the most 90's comics thing I have ever written.

Now Cable's look in the comics is absolutely ridiculous( we owe Mr. Liefeld for that) and definitely would have to be adapted greatly for the big screen.  But as an actor, Hamm could pull it off easy. But where do you put Cable? Does he go into Deadpool 2 if the movie is successful enough to spawn a sequel( I have my doubts).  Do they place Cable in any of the other mutant movies that Fox appears to want to throw down our throats( New Mutants or XForce- he has ties to both teams).  Fox is basing all their non Xmen plans on Deadpool. Its a risky strategy to expand the mutant universe outside of the Xmen but #foxgonnafx.  We will all find out when Deadpool hits theaters on February 12!

Posted by Brothascomics at 11:03 AM