Is it worth a Redbox: Goosebumps 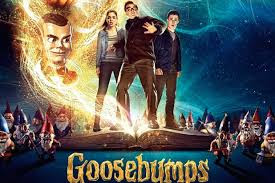 I'm in my mid-40's( damn that's hard to type) so my familiarity with Goosebumps is a bit strange. When the books were popular, I was way too old to be reading them.  However, I was dating a middle school English teacher for a time in the 90's and the Goosebumps tv show on Fox came on right after Xmen so many mornings I just watched it because I was too lazy to change the channel or nothing else was on. I read maybe 10 books and probably saw 75% of the tv episodes so I had a good idea of what R. L Stine was about.

When I heard they were doing the movie, Goosebumps, I was very meh about it.  One is starred Jack Black and if you have listened to any of our podcasts, you know he is near the top of the list of actors we dont fuck with. Two, I felt that the movie would get Disney-fied- even tho its not a Disney production.  I was thinking a movie like Haunted Mansion.  I was wrong.  So wrong.

Goosebumps: The Movie is very good.  The story and plot are well thought out.  The acting by the two teenage stars is top notch and even Jack Black puts in a decent performance as R. L Stine.  The story follows Zack as he and his mom move from New York City to a small town in Delaware.  Zack's dad died recently and everyone is looking for a fresh start.  The family moves next door to a house with fences all around, yet there is a girl named, Hannah inside the house who takes an interest in Zack and teenage flirting and shenanigans follow.

In looking to rescue Hannah from her crazed dad, Zack breaks into the house and opens up a manuscript written by R. L Stine and once the book is open, the characters of the book come to life. It has a real Jumanji feel to it, but not in a bad way.  The creatures, once released wreck havok all over town and of course attempt to kill our heroes. There is comedy, but some real moments of thrill during all the chase scenes in town.

Hannah's dad is actually R.L Stine and he explains that his books come to life when opened and now, Spanky, the terrifying ventriloquist dummy, is out and he opens all the books and releases all the creatures of the books onto this unsuspecting town.

The movie has thrills and chills for younger viewers and some nice comedy only for the adults. There is a twist at the end naturally, but none of it comes off as hokey or pandering.  The movie is extremely well done.

Is it worth a Redbox?  100% YES! In fact, I will probably add it to my personal DVD collection for my daughter as she now wants to go and read all the books.  Definitely worth your $1.50

Posted by Brothascomics at 3:58 PM