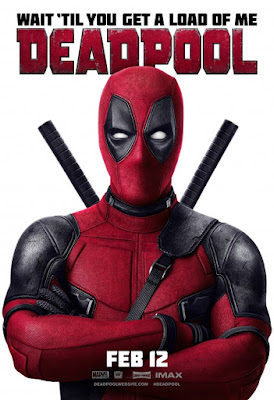 I have to say from the jump that the box office success of Deadpool was a huge surprise to me and the rest of the members of brothascomics.  I had read the projections of a 65 million dollar opening and I thought that was very optimistic for a couple of reasons: 1- The character Deadpool, while beloved by comic fans, is not a very well known comic book property to outsiders. 2-  The actor/star Ryan Reynolds has a shaky box office history with comic book properties( Blade 3, Wolverine: Origins, Green Lantern, RIPD) and a shaky box office record all around.  It seemed like a potential disaster waiting to happen at the box office.

But, I think what I failed to see, and what many others failed to see, is that the character Deadpool and the actor Ryan Reynolds are perfectly matched.  His acting, style, and humor fit the character like a glove or a tight, red spandex suit.  His personality makes the movie work and even when its not working, there is enough good will built up through the movie to make you forget about the bad parts.  He is so intertwined with the part/character, I think, very similar to RDJ with Iron Man and Hugh Jackman with Wolverine,  he may have a hard time finding success in roles where he is not playing Deadpool.

Overall, the movie does not have many bad parts and let downs.  The movie is told in flashback mode and opens essentially on the leaked animated footage that made this movie happen to begin with. Deadpool is looking for Ajax, the man/Dr who turned Wade Wilson into Deadpool with a series of freakish experiments to activate his latent mutant powers after Wade Wilson had contracted incurable cancer.  To give himself a chance to be with the woman he loves( Vanessa), he agrees to the experiments whose final results turn handsome, scoundrel Wade Wilson into hideous looking Wade Wilson.  And now Deadpool is looking to get revenge on the person who turned him into a freak.  Of course the bad guy kidnaps his girl which leads to our culminating fight scene with Deadpool, Colossus, and Negasonic Teenage Warhead versus Ajax, Angel Dust, and a group of goons.

The movie makes all the standard comic tropes in terms of action scenes and battles.  The only real difference being the constant dialogue by the "hero" and his penchant for breaking the 4th wall and addressing the audience and often making references to other comic book properties and actors by name.  Its a risky strategy and it pays off because its done with fun and its not over done. Yes, the jokes are a bit sophomoric at times, but so is the character.  There are some genuine heartfelt moments, but the character is really just playing out on the screen as he does in the comics- and that's a good thing.

Bottom line, I am 3 days from seeing the movie and reading formal and twitter reviews and overall, in my opinion, the movie is good, not great.  People were mad hype for it in the movie theater and some dude was laughing so hard over the faux credits at the beginning I thought he may have been having a seizure.  The movie is fun and it works for THIS character.  There are way too many think pieces out there stating that THIS is what comic fans have been looking for and R rated is the way to go.  And now there is talk that X-Force should/could be R rated.

Just stop! Like for real stop. Let's enjoy this character and this move for what it is.  A fun, romp and spoof of the genre.  Overdoing that or assuming that other, even lesser known characters, will have the same type of success is foolish thinking to say the least.

So well done, Deadpool. You took the world by surprise and raised the bar for superhero movies moving forward.  The ball is in your court Batman V Superman... dont blow it!

Posted by Brothascomics at 10:05 PM