Two weeks ago, my family packed in the mini van and headed up I-75 from Metro Atlanta to Knoxville, Tennessee for Marble City Comic Con.  The folks were kind enough to grant us press passes into their event and we wanted to drop a review of the con for our readers.

Con Size
Marble City is a smaller con.  I would have to get the actuals, but they probably do 3000 or some visitors over the course of the weekend.  The Con was held in a convention center and there was plenty of space for walking around and for vendors.

The Badge Process
If you have read any of our reviews before, you know the badge process at a con can be the worst part of the entire weekend.  Marble City had an easy badge process.  They were out of press passes when we got there, but the organizers were quick to resolve that issue and we were processed and in the con in less than 5 minutes!  This was OUTSTANDING!

The Guest List
Being a smaller con, they had a few guests that I for sure wanted to see.  I had two guests I really wanted to interview.  The first was professional wrestling manager Jim Cornette who sadly got sick before the con and did not make it.  The 2nd was comic book artist, Mike Zeck. He is probably best known for being the artist on the original Secret Wars. I hoped to get an interview with him, but he was overwhelmed with commissions and I was not able to talk to him.  I did get this sweet picture, tho. The big guest was Manu Bennett from Arrow.  I did not get a chance to speak with him, but I did get a chance to listen to his panel on Saturday afternoon.  He seemed very genuine and enjoyed his time being there. 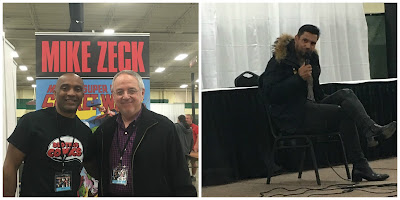 Vendors
A wide variety of vendors were found throughout the con.  If you wanted comics, or toys, or jewelry, or if you are really into Steampunk, this was a great con for you.  I even met Steampunk/Penthouse Pet, Sarah Hunter( @mssarahhunter). But they really had anything you wanted to buy.  Some vendors were crazy overpriced but you find that at every con. 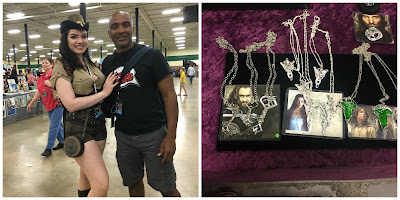 The Cosplay
For a smaller con, the cosplay was very good.  I saw a few original costumes and people defitely put their time, energy, and money into their cosplay.  This one dad had his kids in multiple costumes and they changed over the course of the day.  That dad was winning for sure!  There was a Cosplay costume contest and there were some awesome costumes of characters that I really didn't know.

Family Friendly
This is a very family friendly con.  They even had an area set up for the kids with activities for kids and their parents. This was a great addition.  Most cons don't offer anything for little kids, but they had an coloring area and even trivia.  My kids actually won the Star Wars Trivia contest for kids and won some pretty cool swag!

Overall
If you live in North Georgia or South or Middle Tennessee, this is a great, smaller con to attend- especially if you are new to comic book conventions.  Some of the larger cons can be overwhelming to new visitors and may spoil the experience and make you never want to attend again.  Marble City Con is great family friendly con that allows you to see some awesome cosplayers and pick up some toys and comics to make yourself very happy!