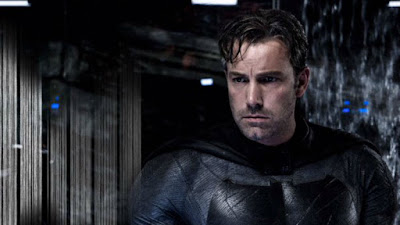 News broke yesterday that, Ben Affleck has been named an Executive Producer on the Justice League movie.  This comes weeks after news that Affleck is also going to write, produce, and direct his own solo Batman movies in the future as well.

This is no real surprise.  Affleck's reputation as a filmmaker is stellar and can only be a boost to the DC cinematic universe.  Because of his celebrity status, people often forget that Affleck is a huge comic book nerd.  His affinity for Batman is well known, as well as the Justice League.

I see this going one of two ways. First, this is  a pre-emptive strike by DC to possibly lessen the influence of Zack Snyder moving forward. Whereas I may debate the merits and credentials of Zack Snyder as a director, he does have a flair and talent for making movies look awesome on screen.  To me where he falters, is his ability to craft and create a consistent story- and this is where having another director such as Ben Affleck can help.  Additionally, Affleck can help alleviate some of the pressure that comes from being the head of the entire of DC Cinematic Universe.  Zack Snyder, rightly or wrongly, has come under increased scrutiny recently about his vision for these beloved characters.  Having an experienced additional set of eyes- who legitimately cares about the characters can only help the final product.


The second way is to look at this is that DC is going to move past Zack Snyder after Justice League 1 and allow Affleck to run DC Cinematic moving forward.  This would put Affleck in the "Kevin Fiege" role (the person who oversees Marvel Cinematic).  Affleck has experience in this role as he has written, produced, and directed 3 feature films.  He can wear all these additional hats and  he may be in a better position to handle the intense scrutiny that comes from this position better than Zack Snyder.  Affleck has familiarity and affinity with the source characters and materials- something that people often question regarding Zack Snyder.

This is a good thing I think for DC- either way it plays out.
Posted by Brothascomics at 10:44 AM