Is it worth a Redbox: Dark Places 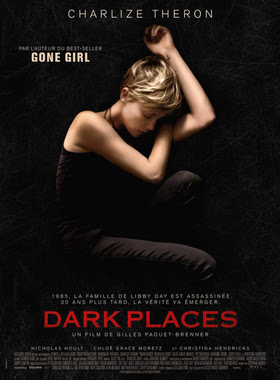 In our continued series of watching movies that you may have skipped in theaters, we review the movie Dark Places.  Dark Places is based on a novel by Gillian Flynn, who is probably most well known for writing, Gone Girl and the hugely successful movie adaptation that followed.  If you have read any of her books, she writes stories based in the Midwest and there is a twist ending that is usually a huge surprise.

Secondly, Dark Places- the movie is a fine Redbox rental if you have never read the book.  The movie is a mystery about who killed a farm family in Kansas in the 80's. The movie is told in a sequence of flashbacks that happen on the day of the murder and on the present day life of Libby Day, played by Charlize Theron Life has not always been easy for Libby Day since the murders and without any real skills, Libby is broke and needs to make money off her fame and notoriety.  Enter Lyle, played by Nicholas Hoult,  who is a member of a Kill Club- a group of people who love to investigate crimes and murders.  Members of this Kill Club do not believe that Ben Day, Libby's brother who was convicted of the murders, is the actual killer.

Without spoiling too much, the movie is perfect for Redbox if you are struggling to find something to rent. There are enough thrills and intrigue to keep you guessing until the end.  It really is a perfect $1.50 rental.

Posted by Brothascomics at 3:43 PM