Trailers before the Force Awakens 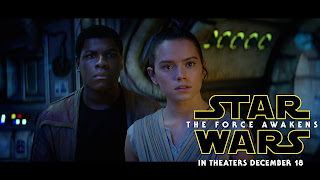 @brothascomics saw The Force Awakens on Thursday night and we will have the full movie review up on Sunday so you need to see the movie before we spoiler it in our review.

Before that tho, I wanted to drop on the trailers that ran before the movie We saw a 2D print o  may be different m so our tr  Plan for an extra 20 minutes with the trailers because there are a few of them. A few we had already seen  I was looking forward to seeing Civil War on the big screen, as well as X-Men: Apocalypse. A few, I had never heard about and the trailers assured me that I will never see these movies when they come out unless someone else is paying.

Here is our rundown.  Enjoy!

You ever fell for one of them Halo trailers thinking it was a real movie?  That is what I thought Warcraft was at first. I'm like, "oh this isn't real".  Um, it is and was and man does it look bad.
Now Big Hutch is more of the RPG guy of @brothascomics.  I've never really been into them and this movie ain't changing that opinion anytime soon.  The CGI is "Incredible Hulk" bad and the dialogue is straight out of a badly written comic.  if you pay real money for this, you better own stock in World of Warcraft.


Teenage Mutant Ninja Turtles: Out of the Shadows
I have never really been a big fan of The Teenage Mutant Ninja Turtles.  Never. I just never got the appeal of it and when it was really popular, I was out of the target age demographic  But now I have kids and they are into it.  They have watched the Nickelodeon cartoon over and over, they have alot of the action figures, and of course, they made me take them to see the new movie.  I didn't like it.  The turtles look weird and..... I just didn't like it. But seeing this trailer, actually made me think about seeing the sequel.  Possibly because its not an origin story, I may enjoy this one a bit better.  The CGI technology looks better and even tho the Turtles still look weird, they look better than they did before. I will have to see it because of my kids but maybe this time, I wont go kicking and screaming.

If you listen to our podcast, Big Hutch gave an STFU to all these dystopia future movies such as the Hunger Games and Divergent.  He had just had enough already.  Well, Hollywood has not, and we get another one.  This is based on a book I have never heard of and I am sure I will never read.  The plot seems to revolve around some sort of alien invasion and the human resistance.  Of course teenagers are leading the charge to fight back.  SIDE BROTHA NOTE.... For much of my vocational life, I have worked with teenagers.  Some have been smart, well thought out, and intelligent.  Most have not been, tho and if our future existence is tied to teenagers, then we are all doomed.  But I digress.  The movie looks and feels dumb.  I am sure I will never see this unless my daughter reads the books and forces me to take her.


Independence Day: Resurgence
And speaking of alien invasions.... Shout out to @danerdette... she and I had a discussion on twitter last week about the original Independence Day and the new trailer.  I am not a great fan of the original.  I saw the original opening weekend and at the time I thought it was cool.  But I was also only 24.  Later when I watched it in my 30's, I was like, "um, this is a bad movie!".  Well, the last half is bad.  Before the aliens attack, its pretty good.  Once they attack and the humans form the resistance, its a farce.  So a new ID for me is gonna be a no.  Even the trailer to me looks dumb and without the presence of 90's Will Smith, the movie is gonna be struggle bus for sure.  There is nothing wrong with pulling on peoples nostalgia with the 90's; however, they remaking or updating a movie that was not that good to begin with.  I for sure will not be seeing this.


Fantastic Beasts- And Where to Find Them
I was way late to the Harry Potter train to Hogwarts.  In fact, I still have not seen ALL the movies.  I have read 3 of the books and I have seen all but the last two movies.  More than anything, I just never really got into it until late.  I saw the first movie when it came out and both I and the Mrs fell asleep.  That was my first impression and we stayed away from it for the longest.  But kids change everything.  My kids heard about the books and we started reading them together and they loved it. Then, the  Mrs. really enjoyed the book and read them all and saw all the movies. But a spin off from Harry Potter to me is kinda like, "meh".  I am sure Potter folks are jumping up and down and can't wait.  I am sure I will see this movie because my kids will make me.  The trailer was really kinda boring tho; although its really just a teaser trailer.  You see no beasts and much of the trailer is spent reminding you that this is from J.K Rowling, the lady who created Harry Potter ( in case you forgot) so you can trust that its going to be good. Whatever.

This is the only animation trailer.  It appears to be about animals who solve crimes against other animals(like a police force for animals).  Anyway, the trailer is actually very slow, but very funny.  The sloth joke had everyone in the theater cracking up laughing.  I am sure I will see this because of my kids, but you really have no idea what they movie is about after watching the trailer.


Captain America: Civil War
Its the same trailer that came out on Jimmy Kimmel.  Since its a Marvel/Disney production, I kinda thought it would be the lead trailer, but its way on the back end.  I was hoping for some new or additional footage, but there was none.  I doesn't matter.  I am way too hype already for this movie.  I cannot wait to see Black Panther and the fight scenes from the trailer look great.  The Russo brothers seem to have found a direction and storyline for Cap that makes sense.  The biggest worry is that its overloaded with heroes and villains and it becomes Avengers 2.5 and that would be a shame.

I just did a scene by scene trailer recap for this movie.  But to recap further... I thought the trailer was kinda boring. I mean, I am going to see this movie regardless but the trailer didn't get me hype like Civil War did. I am not liking this Mystique not blue stuff and if she somehow is now a leader with the X-Men, I am gonna be mad disappointed. But I like the idea behind the movie.  Apocalypse looks and sounds intimidating and hopefully this new starting point with younger mutants will lead to bigger and better story lines in the future.

Those were all the trailers.  When I looked at my phone when it was over, I was like, "damn, we just watched 22 minutes worth of trailers and Star Wars ain't start yet"!  But overall, a couple of movies I want to see, a couple that I will be made to see by my kids, and a few I will never see and will unfriend people I know if I find out they saw them.

Check back on Sunday for our The Force Awakens movie review!

Posted by Brothascomics at 11:34 AM