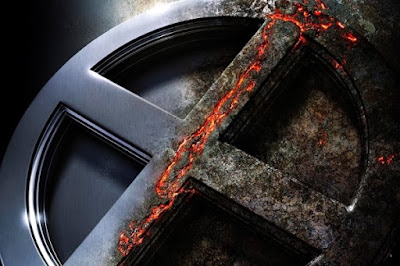 This past week the trailer dropped for the highly anticipated follow up to Days of Future Past- XMen: Apocalypse.  This is an official trailer, unlike the leaked trailer from comic con this summer.  We finally get to see Apocalypse in all his CGI glory and not looking like a villain from Mighty Morphin Power Rangers.

Off the jump, I saw the trailer on my phone after unofficial @brothascomics member, Sandman texted me early in the morning to let me know the trailer was out.  On my phone, I was a little underwhelmed.  Plus I was at work and was kind of distracted and couldn't focus on what I was actually seeing.  Once I got home, I was able to watch it in peace by myself and then with my daughter, who is a huge X-Fan.  So lets look at some frame by frame shots and break down the trailer!  I am also going to mix in some information from the interview Bryan Singer did with ew.com the day the trailer released as he has more background information on our favorite mutants.

Opening scene is on new Jean Grey as she awakes from a nightmare of the worlds destruction and Charles is with her to let her know that it was just a dream.

I do not watch Game of Thrones, but Big Hutch does and he is pretty excited about Sophie Turner as Jean Grey.  This is a "hit reset" of sorts for the Xmen movies as they cast younger with the eyes towards the future of the franchise.  This new group of Xmen( Cyclops, Jean Grey, and Nightcrawler), along with a new Storm and new characters Psylocke and Jubilee are the future of the franchise.  And unsurprisingly, there is no Wolverine- which I think is a very good thing!

The trailer shifts to a voice over from Apocalypse dropping the many names he has been called over the years, God, Rah, Yahweh.... and the scene is inter cut with what looks like him recruiting his Four Horseman. 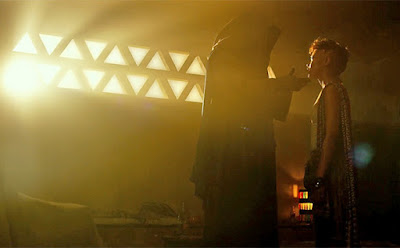 In the EW article, Singer talks about how Apocalypse wakes up from a 5000 year sleep and is not pleased with the world he sees and is now going to set it the way he sees fit- something he has done many times over the years apparently.  This plays into the comics version of Apocalypse who is constantly wanting to cull the weak and allow only the strongest to survive.  His main co-hort in doing this is usually Mr. Sinister so I wonder if he makes it into this movie somehow.

The scene then shifts to the CIA and Moira McTaggert briefing Charles and Alex Summers on the history of Apocalypse.  The idea that he is the first mutant is tossed out there and you get the sense that Apocalypse has already made his first move(s).

The scene moves back to Apocalypse as he seems to be either recruiting or speaking to Magneto.  From the EW article, Singer indicates this movie occurs 10 years after Days of Future Past and Erik and Charles are still estranged.  Erik has left the world of Evil Mutants behind and has moved to Poland and has a wife but something happens to his new found life and family and Erik is at his lowest point when Apocalypse comes to him offering hope and Erik joins the 4 Horsemen along with Archangel, Storm, and Psylocke.  This scene is also cut with a shot of Jubilee.... Now I hate the character Jubilee with a passion!  The comics version was annoying and somehow they made her even more annoying in the 90's cartoon. I am not sure how/why they decided to put her in this movie, but I am not happy about it! 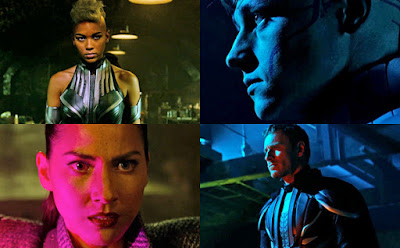 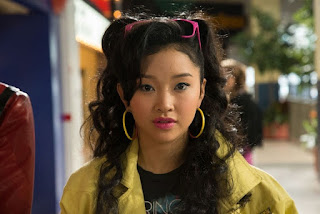 As Moira explains the 4 Horsemen to Charles and Alex Summers, there is a great line of how maybe the Bible got the 4 Horsemen idea from Apocalypse.  Let me also take the time to hate the idea that the Summers Brother who has it most together is Alex. 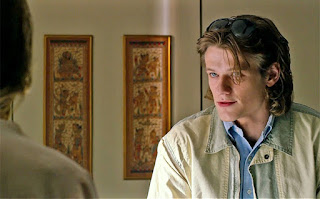 Let me tell you something...no one in their cotton picking minds in the 80's or 90's ever wanted to be Alex Summers.  We all wanted to be Scott Summers, leader of the XMen and bae of Jean Grey.  The fact they have screwed over Scott Summers/Cyclops in these movies is probably the thing I hate most about the XMovies.  They dicked the character over so much, they even turned him into an asshole in the comics,too!  Sorry, side brotha note!

The trailer then moves to show Charles hooked into Cerebro with a tear and a concerned look worried that "he can control all of us". The quick cut is to outside of Cerebro and Apocalypse and the Horsemen are there and Magneto moves Charles across the room. 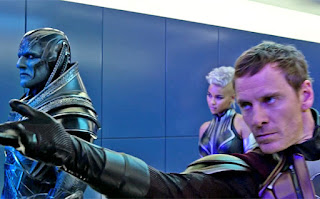 Raven/Mystique is upset by this and we see a scene with her and Beast discussing why the XMen are needed again and Raven drops a line as to why she is there.... to fight...... Side Brotha note..... I am not down with this Raven not being blue stuff. I know the actress now is high profile with 2 Oscars and probably believes she is better than this material! She made mention in an EW article where she was not down with the 4 hour make up to play Mystique.  Fine, I guess! But it just seems a bit odd now that she is only Raven in the trailer and we don't even see her as Mystique.  And it looks like Raven is taking on a leadership role with the Xmen... again it just seems a bit off and forced.  It looks like she is leading with Beast- which makes sense since Hank has been with Charles from the beginning.

Then there is a line in there where Raven corrects Scott about being able to control his powers , "but this is war".... ugh. Look, I am excited for this movie, but that line gave had a XMen: Last Stand vibe to it and made me throw up in my mouth a little bit.  Hopefully this is the start to having Cyclops become the leader of the Xmen that we know him to be and not the whiny little bitch he is portrayed as in the movies.

The trailer starts to wind down with some drop in shots of Storm and Archangel, along with Magneto using their powers( Psylocke does not make the cut at all using her powers.)

There is also a cut in where we get to see Apocalypse use his powers.  In the comics and the cartoon that most people are familiar with, Apocalypse has shape shifting powers allowing him to get larger, as well as shift his body into weapons.  You see him get big on Charles in a quick shot.  Curious as to how much of that we will see in the movie.

The trailers ending begins with Apocalypse monologuing and seeing more destruction, mixed in with a shot of Apocalypse inside Cerebro and Quicksilver doing Quicksilver things

The final shots are of Charles. One he is hooked to Cerebro and his eyes go black as he explain how he has never felt this type of power and the trailer ends on the money shot of Charles, in the wheelchair, and bald.  In the EW article, Singer says its the original chair from the 1st Xmen movie and they actually had to buy it back from a collector( I bet that cost them!) 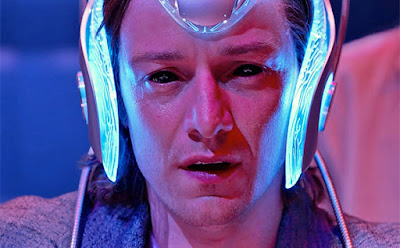 That's pretty much it.... There is such debate about the XMovies... Some people love them, some people loathe them and this trailer, if you read and believe Twitter, intensifies that debate.  I am not sure how I felt about it. I guess, meh... Trailers are to get you to want to spend your money but I was gonna spend my money on this anyway.  Bison4Life, a follower on Twitter, stated that maybe we are all in trailer fatigue and overload and that could very well be true.  In the past 3 weeks, we have gotten trailers for 3 of the most highly anticipated movies of 2016.  That is on top of what seems to be a new Star Wars trailer everyday.  Maybe there is nothing to get excited for? Maybe, six films in, we know exactly what we are going to get from an Xmen movie and Bryan Singer and we are just holding excitement down until it comes out? This trailer did nothing to make me want to see it more, I do know that.  In Singer I Trust with these movies, tho.  He seems to have a beat and pattern to make these movies successful and highly entertaining so until he makes one that is terrible,
I'm rolling with him like Xavier!

Posted by Brothascomics at 11:55 AM