There is so much to unpack in the trailer and as I was reading the reactions on Twitter this morning, I did not think my thoughts could be contained in 140 so Ima share it all here.  Once again, I must state up front that I am not a big fan of this movie idea going in.  I think DC has rushed trying to get a Justice League movie up because Marvel already has 2 Avengers movies.  But people forget how hard Marvel worked to get to that first Avengers movie.  Two Iron Man movies, one Captain America movie, and one Thor movie set up the first Avengers movie and slowly introduced others characters such as Scarlett Witch, Hawkeye , SHIELD, and Loki so by the time we saw them all together in one movie, it just seemed kinda natural.  DC is skipping all that by turning "Man of Steel" 2 into a Batman movie essentially with Superman as his co-star! And on top of that, pushing all their chips in by having Wonder Woman star and guest appearances by much of the Justice League( Aqua-bro, Flash, and Cyborg).  Look, there are many ways to skin a cat and I am not saying it wont work for DC this way, but I am saying that when you force it all together at once, you often get a mess of a movie( See Avengers 2).

My initial thoughts on the trailer were kinda lukewarm. I've watched it a few times now and that has not really changed.  I know alot of Marvel fan boys were deriding the comedy bit at the end but that is not my major issue with it.  The trailer was just kinda boring really with one exception.  With that, lets break down the trailer.....

The first part of the trailer is dominated by the meeting of the secret identities at some sort of gala thrown by Lex Luthor.  They have a brief exchange about their alter egos with each one deriding the other.  Bruce stating that the Gotham in him doesn't trust freaks dressed like clowns and Clark not being a big fan of Batman version of "vigilante justice".   The trailer is inter cut with scenes we have seen in all the teaser trailers. Its a good scene. I am a big Ben Afflek fan, but not so much as him as Batman.  Both in the suit and outside of the suit, he seems to be channeling Clooney instead of Afflek (that is just me hating on Clooney.)  One of the best parts of MOS( and I am not a fan of the movie) is Henry Cavill as Clark Kent.  I thought he brought a certain weight to the role and out of the nerdy, clumsy outsider that dominated the portrayal in the Christopher Reeves version.

The secret identities brief stare down in broken up by Lex Luthor.  Now again, this is going against the grain of the Lex people know( and some love/hate) from the 80's version.  Eissenberg is playing Luthor almost in a manic state as he name checks both characters and talks about bringing people together.   Its a risk playing Lex off too goofy- especially compared to the version alot of comic fans are comfortable with.  He does seem a bit more menacing later in the trailer, but the hair gotta go!  I am personally a bigger fan of the Justice League/Justice League Unlimited version and in my heart, I wish they had cast Luthor as a black dude( like Denzel).

The trailer moves on with more shots that have been revealed in all the teasers.  The one that interested me the most was the one with Batman fighting in the desert against the "Super Troopers?"
The flying characters in the background look alot like Darkseids Parademons who serve him on Apokolips 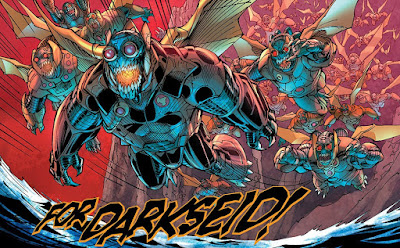 People have speculated that the scene from the Gotham teaser the other night was a nightmare sequence for Bruce/Batman but its interesting these creatures have never appeared before in any of the other teasers.  I have to imagine that Darkseid in the big villain in any Justice League movie so maybe this is some foreshadowing by DC.

Moving on, the trailer finally gets to the big reveal of the big bad in this movie, but all the speculation around this movie has been true mostly.  Somehow Luthor turns Zod into Doomsday and he is finally revealed and obviously the reason that Batman and Superman turn from enemies to frenemies to take on Doomsday.  Doomsday is a little less spiky than he is in the comics but there's no denying who it is.

Having Doomsday in a movie where Superman doesn't die seems like a little bit of a cop out, but DC needed a powerful, big bad to take on Superman and Batman and Doomsday fits the bill as essentially a mindless monster that when they kill it, no one will be upset about it.

The clip continues on with the battle between the Doomsday and our heroes.  Suddenly, Batman is stuck in the cockpit of his Bat-Plane and when Doomsday attempts to light him up with his heat vision, he is suddenly blocked and its revealed to be.....

I have been a big fan of the Gal Gadot Wonder Woman.  I think she captures the look of Diana Prince and Wonder Woman perfectly.  I see some fan boys don't like her because she is too small or skinny but Wonder Woman to be has always been strong and feminine which is not a look that many actresses can pull off and I think Gadot does both beautifully.  I wanna get with her and I'm kinda scared of her at the same time.

The trailer ends with the comedy bit about who Wonder Woman is with... Its a funny line and a bit of levity in a scene which probably plays pretty intense up to the point of that line.  The trailer ends on the money shot with the Trinity ready to kick some ass.

Again, I found the trailer kinda boring, but more importantly, all it did was confirm most of the rumors out there about the movie and most smart internet blerds and nerds knew where this was going.  To me, the movie, if edited properly, and not overloaded with fight scenes, can be a great comic book movie.  I truly believe that!  DC making good movies will force Marvel to step up their game which I believe has gotten a bit lazy after all the success they've had.  But I do not trust DC and Zack Snyder yet.  They have to prove to me that they are more interested in building the DC Cinematic Universe and not more interested in making pretty movies that will make fanboys go " Aww shit? Did you see that?!"  These movies and these characters deserve more than that and the fans do, too.

Posted by Brothascomics at 10:47 AM