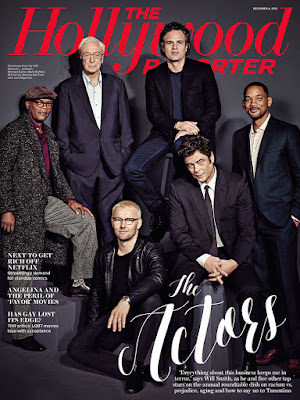 I have to say, it feels like @brothascomics spends a lot of time bashing Will Smith and I know I don't mean to.  Of the three of us, I am probably his biggest fan but I also have become jaded a bit by his movies and his personal life philosophy which appears to be mumbo jumbo wrapped inside mumbo jumbo.

This week, THR- The Hollywoord Reporter, who got dragged by Black Twitter last week for its lack of diversity on their Women in Hollywood issue, came out with their male counterpart this week and in it, the idea of racism in Hollywood was discussed and two of the panelist were black.  The aforementioned Will Smith and Samuel L Jackson.

Now this is gonna be an old school, biblical verse by verse dissection of his comments.  I think going line by line, we can discuss what he said and what he meant.  But we can also discuss the viability of his comments because if you just read what he says off the top, everyone would nod their heads in agreement and that shortchanges his answers but also undermines the reality of the situation and industry he works in.

So put on your Sunday best, grab your Martin Luther King hand fan because we going to CHERCH up in here!  Can I get an AMEN, Brothas and sistas! And in Biblical fashion, the words of Will Smith will be in red

Will Smith said...
"Everybody is prejudiced," he said. "Everybody has their life experiences that make them prefer one thing over another -- it makes them prefer blond hair over a brunette; if you see somebody with dark skin walking down the street, you have a different reaction than you have [with] someone who is 5-foot-1 and white."

Lets break it down...
Verse 1: "Everybody is prejudiced.
This is very true.  We all have prejudgments about certain things and people.  And Everybody translated from the Greek means everybody so no ones gets a pass here.  And again, there is nothing wrong with what he says here.  But verse two, he goes off into that Will Smith bullshit.

Verse 2:  Everybody has their life experiences that make them prefer one thing over another -- it makes them prefer blond hair over a brunette;  OKAY STOP!  Here is where he begins to go off the rails.  Again, just reading the words, it sounds perfectly reasonable to say this. But Will Smith is making a comparison between prejudice and preferences. We all have prejudices and we all have preferences but they are not the same thing- especially when speaking about race.  His line about blonde's and brunettes is a preference. The same way a dude may like taller women or shorter ones or skinnier ones or thicker ones.  That's a preference based on what you like.  If you say, I only like white women or I don't like black dudes, that is preference but its based on prejudice against a race or group of people.  To confuse the two is dangerous and often gives people who want to use prejudice and race as non issues power to say "we all have prejudices" and then use that prejudice to do and say racist shit!

Lets look at verse three where it looks like Will Smith attempts to over correct on the bullshit he just said..

Verse 3:  if you see somebody with dark skin walking down the street, you have a different reaction than you have [with] someone who is 5-foot-1 and white." Now he takes it back to racial prejudice which is totally opposite of what he just said about blonde's and brunettes. But he shortchanges the response and undermines that, yes we all are prejudice, but we all do not act on those prejudices. His example of using a 5 ft tall white guy makes no sense and plays right into a racial stereotype.  So the short white guy is not threatening but the tall black guy is?  He shoots himself in the foot by trying to be politically correct and not to offend anyone who might watch, write, produce, or direct a movie that he wants to be a part of.  And this is Classic Will Smith!  He wants to please everyone and not offend anyone to be able to keep his money train going or to win that elusive Oscar.  Its why he does not take acting chances like Django because he is always trying to play it safe. He reminds me of Obama when he was first elected- always trying to pacify people who don't want to be pacified and don't give a fuck about you.  Now that Obama is headed out of office, his give a fuck button is broke and he says what he really thinks and feels and that is how Will Smith SHOULDA been when he was making hit after hit for these studios when he was in a powerful position to do so.  Moving on....

Verse 4:  The word "racism," he said, implies something worse: the feeling that "your race generally is superior."  Again, back to a very safe argument that when read off the page will make people nod their head and say, "Amen" because most white people don't think they are racist even tho their prejudices against people of color often leads them to do and say racist things.  But again, its Will Smith playing it close to the vest and not wanting to offend. Yes, racism involves superiority, but it also involves supremacy and privilege that many white people are subconsciously unaware of that guides their thought processes and actions on a day to day basis.

Verse 5:  "And I have to say, I live with constant prejudice, but racism is actually rare -- someone who thinks their race is superior," Smith continued. And there is the middle ground again.  Basically saying it happens but its rare, but trust me, it happens.  GTFOH Will Smith!  It happens on the daily to most people and frequently happens  to you.  You may be in an insulated bubble at times to not see it but its happening all around.  Especially now that you are not making the money for these studios like you used to.  Its why you can't get ____ movie made or produced now even though 10 years ago, people would've given you a blank check just to stare at you.

The THR interview goes on and Samuel L Jackson does have a response to questions about racism in Hollywood...( interview in blue and then back to Will Smith in Red for Verse 6)

A moment later, the interviewer asked if actors could do anything to fight this kind of racism. The other African-American actor on the panel, Samuel L. Jackson, answered with a simple "No." But Smith was more optimistic about their chances.
Verse 6 "As actors, we have the ultimate power," he said. "Historically, story combined with imagery moves humanity forward. What we do -- not that it’s a responsibility, but it is the ultimate forum for changing people’s hearts and minds."  This is Will Smith at his finest bullshit right here. Basically saying movies are the vehicle to make change in the hearts and minds of racist people.  Werd? So film is the solve to all of societies racial woes and inequities?  Funny tho how black actors, writers, producers, and directors have such a difficult time getting the funding and support for these vehicles for social change.  And who holds the purse strings and influence to make these movies to change the world, Will Smith? And when given the opportunity, as the biggest movie star on the planet, what movies did you make to change the culture? After Earth? Men in Black 3? 7 Pounds?  All those movies did was make me hate you more- which was a change because I liked you alot more before I spent my money on them crappy movies.
Look, I cannot say what Will Smith has to do on the regular in his day to day.  He may be dealing with alot more or alot less bullshit that a black man in his 40's has to deal with in this country. I do know this, tho.  When giving the chance to speak up or speak out on issues that affect black people and people of color, he was either silent or offered up the same platitudes he did in this article and I think that is weak. And look we all are not Deray or Jesse L Williams nor should we all have to be.  But use the platform of influence that you have for something positive and don't try to convince me that the film you made macking down a white girl is going to change the world because its not!
The Producer

Posted by Brothascomics at 12:32 PM