Is it worth a Redbox Rental: Tomorrowland 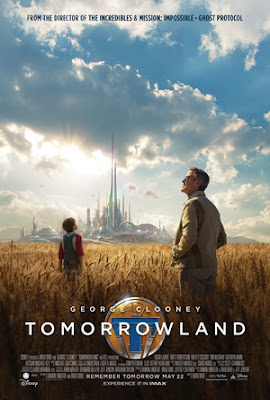 Disney, after taking a break from their turning their attractions into movies, comes back to it with Tomorrowland. A big budget, thriller starring George Clooney and directed by Brad Bird, who most geeks love for being the director of the Incredibles.

This movie did nothing for me personally; although the Mrs. liked it.  It begins in the future and involves time travel which is always hard to pull off in movies.  It also involves multiple time jumps and a plot that is kinda far fetched and you can see why the movie did not perform well at the box office.  It also has robots who you don't know are robots and by the time Clooney does show up in the movie, you forgot who his character was in the future before they come back to the past.... Confused yet? Me too!

It's surprising this movie did so poorly based on the people who produced, directed, and starred in it. The movie is paced poorly, takes itself way too seriously in some parts, and turns into a Men in Black rip off in others. Plus its  "message" is totally lost by the time you get to the end.

In a word, NO this movie is not worth your $1.50.  When it comes on ABC Family, just watch it for free and use that $1 to play Mega Millions!

Posted by Brothascomics at 11:22 AM